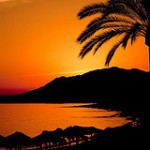 Because of all the comments I got I decided to put some more of the story. Again, please comment with your thoughts.

“Guards! Guards! Come quickly!” The words stopped Victoria’s quick climb. When she looked down, the ground was beginning to fill with swordsmen. The memory of her parents’ death came back to her. Fire burned in her eyes. She knew the archers would come soon, and she would need to be gone then.
Once on the roof she leaned against the dome, welcoming the rest. Just to rub it in, Victoria kicked some pebbles down at the guards. She pulled out her bread and took a bite. She would rest here until the archers came, which she knew wouldn’t be long. The rooftops of Rome were beautiful in the sunset glow.
“Archers!” Victoria’s moment of serenity was short. By the whizzing of the air she decided she had waited to long. There were clangs and thunks of arrow against wood and stone. The owner came out of the building and confronted the soldiers. Thank you Victoria thought. She would need to pay that Rabbi a piece of bread.
When she got to the end of the building she had rested on she leaped to the next. She started her roll with her right shoulder and continued. Flow like water, she thought. She leaped to the next building, then the next. People on the street looked up in surprise. “What are you doing!” They would yell, telling her to come down.
She knew that the guards would be attracted to noise so she turned and took an unused route. She turned left and jumped into unknown territory.

Victoria leaped to a building with a low roof. She slid through the hay covered roof and dropped to the ground. When she was on the ground she didn’t have time to roll. She turned down dark alleys, listening for guards. Distant voices sounded in the air. Frantically, Victoria looked for an escape route. It seemed the only safe place was up. She climbed up another wall, splitting her fingers on the rough stone. She was in the slums now, and they didn’t have fancy, smooth stones.
Two guards came around the corner just as Victoria scrambled to the hay-covered roof. “These d&#! taxes!” The first guard said. “I can barely put food on the table.” The second guard nodded in agreement. These guards did not have as much armor or weapons on them as the other guards. It’s my turn to fight, thought Victoria. She dropped down behind them and clanged their heads together. Dazed, they turned around to a foot in the face.
She punched the second and pushed the first against the wall. That was a sharp clang as his neck snapped back to the wall. One down, she thought. “Hey!” Victoria swiveled around to have the second guard push her down and pull his knife.

4 thoughts on “Rooftops of Rome Part 2 by James”