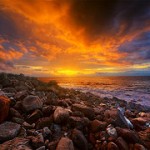 “Hey!” Victoria swiveled around to have the second guard push her down and pull his knife out. “Do you know the punishment for attacking a guard?” His breath smelled of alcohol.
“Mister, mister, I am so sorry!” The boy behind the guard had an Italian accent. “My sister, she is muy estupido! She thinks that the helmets you wear are the heads of a mystical creature. She knows no better!” The boy walked toward Victoria. “Come now Maria, Papa will take you to the doctor.”
The guard wiped the blood from his nose. “Nice try, boy.” The guard grunted. “But I’m not a fool.” Victoria’s savior whispered in her ear. “Now is when we run.” They shot forward in to the labyrinth of the slums.

Victoria trusted the boy and quickly followed him. She could tell he was from that area from his knowledge of the alleys. “Come back here you filthy slumdog!” The guard hurried after them, yelling vulgarities. Finally, they came upon a dead end. Walls extended up far to high for them to scale. “D#&%! There’s no way out!”
Victoria grinned. “There’s one way.”
“Where?”
“Fight.”

Victoria and her savior turned around and waited for the guard to come. They were ready for a fight. The guard laughed. “I’ve got you now you mangy curs.” Before the guard could take another step forward the Italian boy attacked. His face was determined as he sent a knee to the guard’s gut. A sharp oof sounded as the guard bent over to have another knee hit him straight between the eyes. The Italian boy quickly kicked the guard down and ran. “Come on!” He yelled back to Victoria. She grinned and followed the boy.
He turned a corner, scaled a wall, and helped Victoria up. They clasped wrists and once on the rooftops Victoria grunted a thanks. Once they were on the rooftop the Italian boy leaned against the hay. “So, you went through all that just for a piece of bread.” Victoria looked up in surprise. “I never told you that I stole some bread.” The boy grinned. “You just did.” Victoria admired his cleverness.
“My name is Fabrizio.” His voice was accented on the z. “Most just call me Rizio.” Victoria nodded. “I’m Victoria.” Rizio smiled. “Now that we are introduced, I’d like to know where your parents live.” Victoria sat and fiddled with a piece of hay. Pulling the bread from her shirt she responded. “Heaven.”
“I’m sorry.” Rizio’s voice sounded sincere. “The guards torched our house.” Victoria looked up. “Mine too.” Rizio groaned as he sat up. “If I have learned one thing from-” Rizio’s eyes widened. He grabbed Victoria’s mouth and pulled her into the hay. There was a clang of metal as the guard passed beneath them, mumbling.
When the guard passed and the clanging faded Rizio let go of Victoria and let her up. She cleared her throat. “Thanks. I guess I owe you one.” Rizio nodded and looked back. You could just see the ends of the beautiful orange sun around the cathedral. “Right now we need a place to sleep tonight.”
“I’m sorry,” Victoria responded. “Did you say we?” Rizio realized the gravity of his mistake. “Well, I thought,” he stuttered, “since we met and all. I thought we could help each other out with, well, life. Being an orphan isn’t exactly easy.” Victoria huffed. You can say that again. “All right, I think that’s fair. We do need a place to sleep tonight. Perhaps we could ask one of these homeowners.”

“That won’t work,” said Rizio. “These people think that anyone who asks a place to stay is a thief, and they don’t have much stuff to say is their own anyway.” He gathered hay in his arms and in his ratty, torn shirt. “Come now,” he said. “We have to be away from the guards when they see the ones we took out.” Rizio grinned and helped her down. “Don’t forget,” Victoria huffed, “I took care of one myself.” She smiled as they walked away into the forest.

2 thoughts on “Rooftops of Rome Part 3 by James”