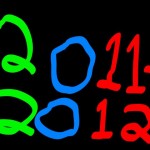 photo made by James using Skitch

Today in LA class we watched a video about the things that were searched on Google the most during 2011. I was thinking about her suggestion for a blog post about what we liked in 2011 and what we’re looking forward to in 2012. After thinking about it for a while I thought that one of the most important things in 2011 for me was when my grandmother came back from Jamaica with a hurt back. She tripped on a telephone cord and hit her back on the tile. For a wile she couldn’t walk very much, nor could she stand much. She also had a messed up toe, but since it looked pretty disgusting I didn’t look at it much. Another bad thing that happened in 2011 was that the neighbor of my piano teacher had a miscarriage. As they both go to my church my family went to the funeral. I am looking forward to 2012 because my parents said I might be getting a dog.I have wanted a dog for almost five years now. It has been the number one thing on my Christmas lists.

2 thoughts on “Thinking Back and Looking Forward by James”