I wanted more comments to post more. I really want to know your opinion of my story. I have not touched it in two weeks and even more because of break. I have written 11 chapters, but plan on writing 16. If anyone is up for illustrating my story that job is still available. Here is Chapter 9

Tuesday came fast. Before school started I told her. “Ummm sure.” she said. “That sounds cool.” “Your mom already has packed for you.” I replied. “Sweet.” she said.“You know Travie lives in Chicago.” I mentioned to her. She said that she didn’t. The week slowly trudged on, Wednesday and Thursday, but especially Friday went by too slowly. We were finally getting on the plane. Rian got stuck in security because she left her iPhone in her pocket. TSA agents waved her and we were finally cleared. We barely made it on time for boarding, but we made it onto the huge and full of T.V.s Delta 737. I sat down with my mom and Rian, and popped on ESPN. Neil Everett and Stan Verret were discussing that Rob Gronkowski was the best tight end in the league. I flipped it to XM radio. Jason Derülo’s “It Girl” was playing loud. I knew he was going to be a star when I first heard “In My Head” , nobody knew about him, but since, he has written “Don’t Wanna Go Home”, “Watcha Say”, and my personal favorite, “Ridin’ Solo”.  The song changed to “Good Feeling” by Flo-Rida. I love music, but I hate country, very unlike Robbie. The T.V.s made the 2 and a half hour plane ride easy and quick. The Delta landed smoothly into Chicago O’Hare International Airport. The plane was connecting the flight from Atlanta. My mom didn’t have a meeting until later that evening so we decided to visit the Museum of Science and Industry. 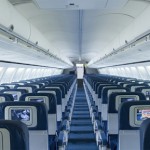 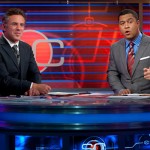