Sorry for in the last post for saying it was chapter 6. This is chapter 6! 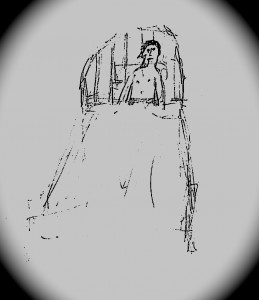 Chapter 6
I looked down at the boy. He waide him. My servants aren’t actually real people. They are very useful, animated, wood creatures that I brought to life. They have no feelings and do whatever I say. So they don’t feel sad, they don’t feel treated unfairly, and above all they don’t try to overpower me. Even if the did try, they wouldn’t have been able to because nothing other than another demon could kill me.Anyway, the boy was probably around the age of eleven and was about average in height and weight. The servant had cleaned him off and backed away out of the room. When he woke up I was right by his side.

“What is your name?” I asked looking deep into his eyes.

“John,” the boy replied and fell unconscious again. I let him be. I looked out the window. The last leaf fell from the tree that stood outside my house. The last straw. I would have to take my complaints about Hecta to someone more powerful than even me: The Great Da’enth. The greatest of all of us demons. The oldest and the wisest. His name meant all powerful in the old tongue. I hadn’t talked to him in almost five hundred years. Hecta would say that it was because I was afraid of the Da’enth. It was true. I was afraid of someone more powerful than me. But I was sick of Hecta. Before I went though I would have to pay another visit to my little friend that I had locked up. The one that broke in.