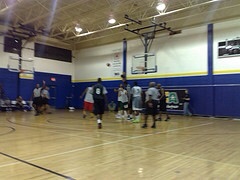 I am proud of winning the championship in basketball. We went undefeated in the preseason and were the preseason champions. Next we had the real championship. We won our first playoff game, we knocked the team out of the playoffs. Our next game was against a good team. I told my friend Shaffer we have a big game today. We had a player who was not going to be there which was one of our best players. It was a tough game but we won. We made it to the championship. It was against one of my friends, Ben M’s, team. It came down to the last second but we won the championship and I was so proud of myself.