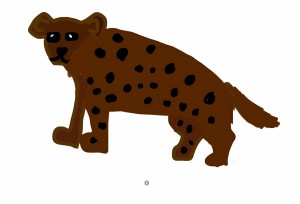 Above is my wisdom tale that I wrote for my L.A. class at school. I used Sketchbook Express to draw the picture of the hyena. Comment below to write what you think the moral is to this story.

There once lived a hyena who hated to help others. One day he was asked to help a chicken carry some straw so the chicken could make a bed. The hyena got terribly hungry while carrying the straw and devoured the chicken.

The next day, the hyena was asked yet again to help. This time he had to have an old friend, the zebra, live in his house because the zebra broke his legs and could not care for himself. The hyena was not willing to share his food or water even if the zebra was a friend. The zebra had to find his own food and was starved.

The third day, the hyena was asked to help a lion, but decided to be annoying instead. He stood in the lion’s path and made it hard for the lion to hunt.

Finally, when the hyena got in the lion’s path a couple of times, the lion chased him out of the forest and told him to never come back or else he will be hunted down.