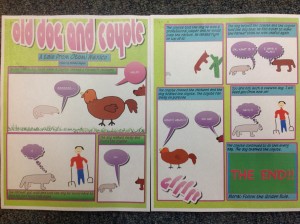 In class we made a comic based on one of our wisdom tales. I chose a tale called Old Dog And Coyote. It is about an old watch dog who was sleeping while a coyote chased the farmer’s chickens. The dog went to find his own food and he found the coyote. He helped the coyote and the coyote helped the dog get the farmers trust back. I chose to do my pictures on Sketchbook Express on my iPad. For me, getting the pictures on to the computer was hard. I emailed them to myself but it continued to freeze. After I got the pictures on to the computer it was easy. I really liked doing a project on comic life and I hope I get to do it again.