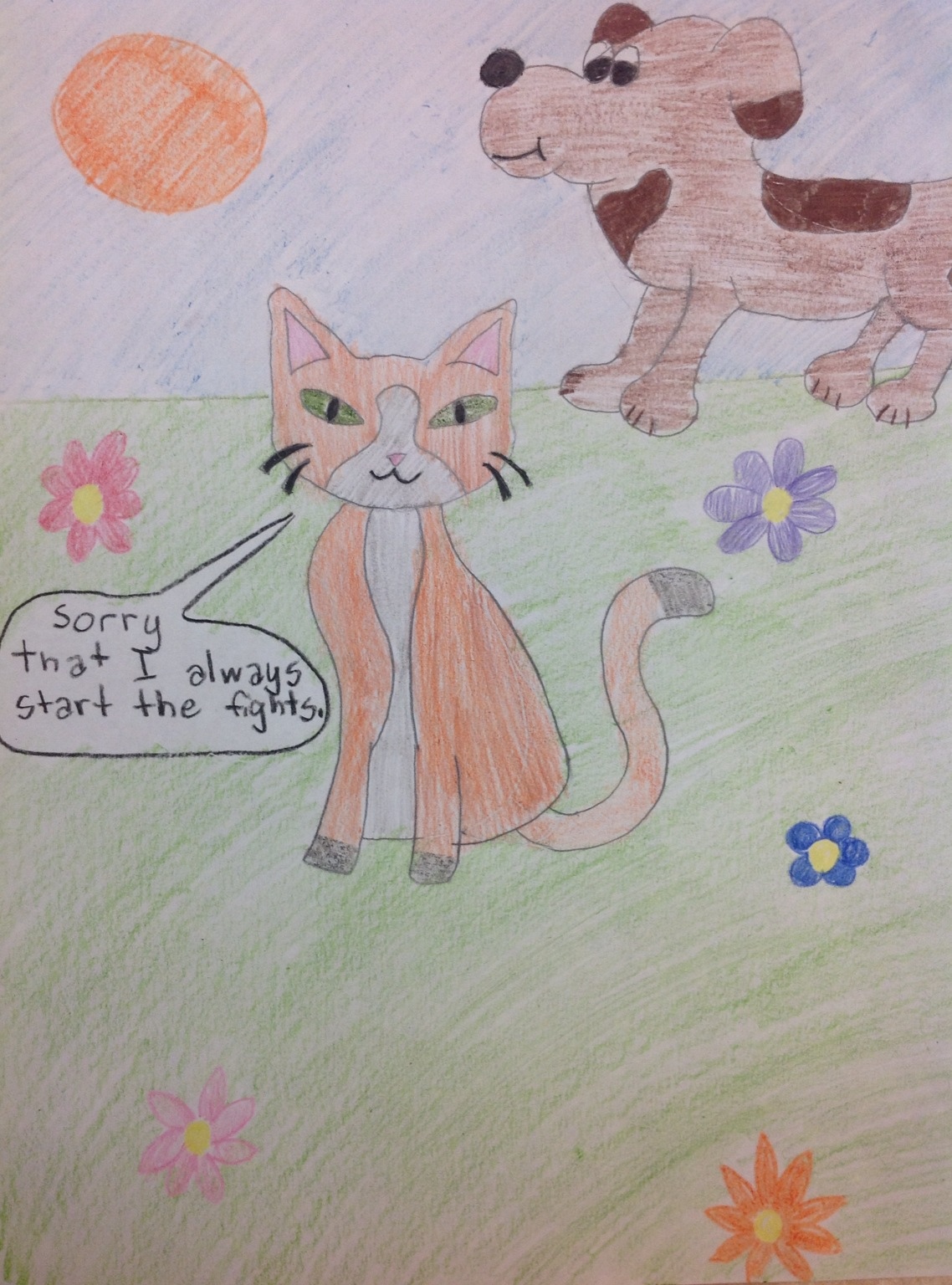 There was a young man named Jerry. He had a beautiful cat and a not so beautiful dog. Quite often they would get in fights. Most of the time, no one would get hurt but just one time the dog got bit very bad in the ear by the cat. Sooner or later Jerry was very annoyed with the ruckus they would make in the middle of the night so he decided he really needed to get rid of one of his pets. He loved them both very much and he took a long time to decide who would have to leave. He finally decided to get rid of the dog because he was not as cute as the beautiful cat. He didn’t know who to give the dog to. Unfortunately, he ended up kicking him out of the house with no food or water.

It was coming into winter and the dog was starving and cold. He wandered every day until he came upon a padded down area of soft hay. He cuddled up all warm in there and went to bed. He was surprised to find out it was a pack of wolves’ home that he was in. Shockingly, he was warmly welcomed by the big wolves and soon he had a new place to live.

All that time a small rat was watching Jerry and his pets fighting and how the dog was kicked out. He didn’t say anything at first but eventually he could not hold in the secret much longer. He went to Jerry and started a conversation. He finally got the point through to him that even though the cat was so cute he was really starting all the fights and hogging all the food. Before Jerry actually processed all this he thought he made the right decision of getting rid of the dog. He began to feel a great pain of sadness like he had lost something big. He realized that he missed the dog sooooooo much. His life wasn’t the same.

He set out in the forest hoping he could retrieve his beloved dog. He came upon the dog with all the wolves and begged for him to come home.

“Please come home. I made a big mistake by getting rid of you,” said Jerry.

“I feel like I am in a better place here and I am treated better here!” exclaimed the dog.

Jerry was very sad to hear that and wished he could start over. He heard a quiet voice in the distance that was saying that you only get one chance in life.

“Please just let me start over!” he thought to himself. He suddenly fell into a deep sleep and dreamed of the things he could have done differently and better in his life. When he woke up he had not clue where he was. Standing right next to him was his dog and cat together and not fighting for there first time.

“I should never pick things for their looks ever again!” mentioned Jerry.

They both made a deal that they would get together and visit at least once a week. From now on they live their separate lives but meet up each week to bond.

5 thoughts on “One Chance by Anna W.”