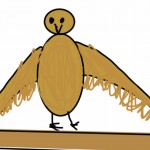 The beginning of my story starts with a wolf, named Clover, who is thrown out of his pack and goes to a wise owl. The wise owl says that his pack needs him because he has the ability to think before he acts. When Clover goes back to his packs ground he sees them fighting another clan and in the and gets the two packs to have peace. The moral of this story is to think before you act. The reason I did this moral was because I think that to think before you act is extremely important.

One thought on “Wisdom Tale by Dylan J.”