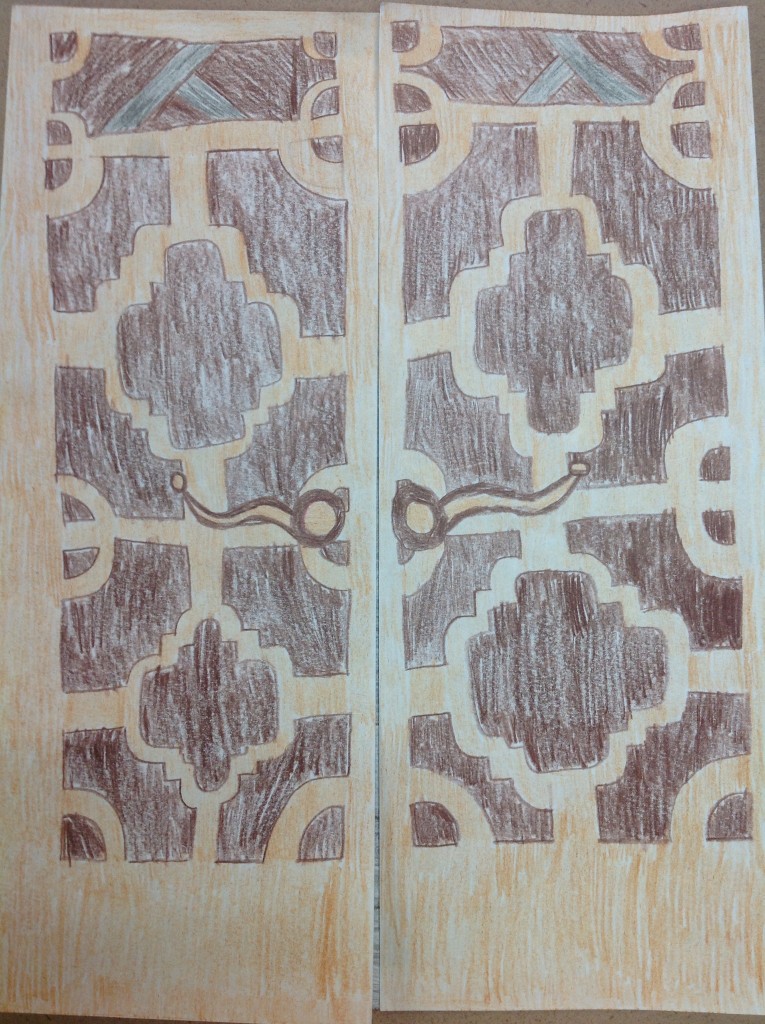 This is my Lady or the Tiger ending in first person.

My heart pounds. I have seen the princess give me an indication of which door to choose but I am unsure. She may think that if she cannot have me then nobody may have me, or she may want me to live the rest of my life in peace. I go to the door the princess suggested and pull. The door does not budge. The entire arena bursts into laughter. I try again with no effect. After I give up I go to the other door. My trembling hand reaches for the handle of the large, ornate wooden door. I grasp it and then I hear something, a deep rumbling coming from underneath me. I look down just in time to see the ground fold up underneath me and I fall into darkness. When I come to I am lying on the cold stone floor. I get up and look around. All around me are skeletons and wooden beams that are covered in scratches. I turn around and see two red eyes. I turn and run. Once I am in the other end of the chamber I face the eyes. As I watch, the tiger leaps out of the darkness and sprints towards me. The tiger is almost upon me when it jerks to a stop. I look at the tiger again, and I see that it has a chain around its neck. It is now when I wonder what has happened. I see a hallway. There is no other way out that I can see so I go down the hallway. A hidden door shuts behind me. I pound the door but it is stuck. I continue on. In the next chamber there is a pit of lava with pillars topped with ice in the lava. The door is high up on the opposite wall. The only way is to jump from platform to platform. I take leap to the first platform from where I stood. I slip on the ice and fall off. My fingers find a ridge in the ice and I stop falling. After much time just hanging there I manage to pull myself up. Much later I have finally made it to the second to last pillar after much slipping and hanging. When I jump to the last one it shakes and begins to sink into the lava. I quickly steady myself and prepare to jump to the door. I jump and land in the doorway just as the pillar falls sideways into the lava. I peer into the next room and it seems like a normal room with cobblestone flooring. Just to test I pick up a piece of loose cobblestone and throw it onto the rest. A piece of cobble stone moves down and opens the section of floor around it into a spike pit. There are skeletons of people in the pit stuck on the spikes. And something that looks inhuman. Its skeleton looks long and thin with large spikes coming off of it. The floor returned to normal. I tread carefully between the stones until I am at the door. When I go through I see a large, many footed insect staring at me. It was covered head to tail in a flexible shell and spikes. It rears up and slams itself into the wall above me. Large chunks of stone rain down around me. I see the door behind the beast. I sprint onto the torso between the spikes and wait. The insect’s head slams down on the spikes around me trying to get to me. I sprint off the insect and make a leap towards the door. I fly through the door just in time for the room behind me to collapse on the insect. As I walk into the room I do not believe my eyes. The room is made of gold and silver and many other metals. There are several pedestals with emeralds, sapphires, rubies and diamonds. The room is filled with coins and animal pelts. I see a large gold gear click into place and a stairway descend from the ceiling. I reemerge into the arena full of guards. One spots me and says for me to come to the king. I go to the king and tell him all I have discovered. The king and I agree to give him all the gold and pelts for the hand of the fair princess.

One thought on “Lady Or The Tiger by Norman”