My story has been very boring lately, but I had to let some time go by before I let the story get suspenseful. The suspense starts here! Please comment. They are very much appreciated!

We watched the movie about Chicago, Rian and I fell asleep out of boredom. Walking out of the theater my mom’s phone rang. She picked it up on the first ring and a friend from Colorado picked up. She had extra tickets to the Carolina-Chicago game. “Mom! You can’t turn those down.” I persuasively said. “I’m sorry Sarah, but we….” my mom trailed off. “We’ll take them!” She said. “You’re free for the game? Right mom?” I questioned. “Yes, Andrew. Of course.” My mother replied almost sarcastically.

That night. My mom had a meeting in the hotel, so Rian and I bought room service pizza. I heard a soft knock at the door, followed by the sound of a man with a deep voice saying, “Pizza!” A very big African-American man walked in. He was wearing a blue Matt Forte jersey and large Levi’s jeans. I accepted the pizza and handed the man a 10 dollar bill. The bill was snatched out of my hand and the man turned around muttering to himself, “Is that the little girl Tractor wants?” While we were eating, Rian peeped, “Who was that suspicious man?” “I don’t know Rian.” I said. After eating pizza and watching the Poinsettia Bowl between Wyoming and BYU. Rian climbed into the Queen size bed, and me into the pullout couch. When I woke up that morning it was 9- o’clock and my Mom was shaking me. “Wake up Drew; we have to leave for the game in an hour. I got dressed, put on my Raptors t-shirt, pants and a sweatshirt. We took a cab to the game early to avoid traffic.  When we pulled up to Soldier Field on Lake Shore Drive I sniffed the cool and crisp fall air. It was a great day for a football game, nothing could go wrong. 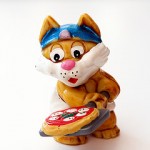