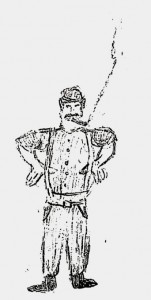 The voice became more and more powerful. The closer John got to Boston the louder and more frequently the voice came to him. He needed to find the source. It had to be some kind of telepathy because he could not find any other plausible explanation. Of course that wasn’t a plausible explanation at all, but…

“We’re here honey,” his mom informed him. Of course John already knew they were almost there. You would think his mom didn’t think he paid attention. John shook his head. The car ground to a halt as they reached a rundown parking lot. The fence was twisted and warped. The lot wasn’t paved, but gravel had been placed instead. Grass grew where the gravel was thin and buildings surrounded the lot. Those buildings too were rundown and looked as if they would collapse any minute. They got out of the car and closed the doors. As they walked, dust from the rocks filled their eyes. John rubbed them and then walked on with his mom. We were going to the Museum of US History. They had to go there because he had a report due in a week that was about major battles in the Civil War. His mom also liked going, but for a different reason. She liked baseball. “It’s America’s pastime,” she had said. They turned a corner onto the street that would be where the museum would be. It wasn’t there. On the side of the road was a man that was dressed like a construction worker. He had a bright orange vest. The man was leaning on a fire hydrant. John pointed to him and they walked towards him. He glanced at his mom and in a millisecond they both knew that he was going to be the talker.

“Umm… excuse me mister. Do you happen to know where the Museum of US History is?” John asked. He turned to John. He had had a couple of missing teeth and was smoking a short, stubby cigar. Black smoke was puffing out of the end of it. He had tattered pants. The man stared down at John.

“Well there was a museum of the History of the US a couple months ago,” he answered. John nodded. Was he a psychotic? Some crazy guy who didn’t know a thing about what I was talking about? Nah, he looked pretty sane.

“Okay…” John asked, “but what happened to it? Where is it now?” This was confusing. Did it get demolished? Replaced? It didn’t make any sense; the museum was doing well the last time he had visited it.

“Well, now there is just no museum where it was,” the man said biting down on the cigar which was wet by now. John nodded again. This time his mom spoke,

“Thank you,” she said in her warm flattering voice, “We will be off now,” she told the man still smiling. Then they walked off. The man shook his head, turned around, and resumed smoking his ever present cigar. The city was still looming above them. The famous Fenway Park in the distance. John turned the corner and saw a huge building with a sign saying: μουσείο της ελληνικής μυθολογίας, and underneath it said: Museum of Greek Mythology.

“Do you want to learn about Greek mythology?” He asked her. He figured that they had came all the way here, so they might as well do something while they were there. Come to me. There it was again: the voice. A bell rang as we opened the door. There was no one at the front desk, however.

“Anyone there?” Mom said rather loudly. No one answered. They walked on. On the walls were large paintings of the greek gods and captions underneath, describing each of the gods. Each one was written in both Greek and English. The museum was almost a maze. The passage with all the pictures and writing twisted and turned.

We were in the middle of the maze when John faintly heard screaming. At first he wasn’t sure if it was screaming. It came from outside.

“Did you hear that?” he asked his mom. He wanted to make sure this wasn’t just his imagination. It wasn’t.

“Yeah, I did hear that,” she answered. Then he felt a hotness to his face and an orange glow coming from around the corner of the passage. His mom liked terrified. “No, no, not, not again,” she muttered. She knew what was happening. Then at that precise moment he knew too. It was a fire. His dad had died in a fire when he was very little and she had survived. This was like it happening to her all over again. Soon, smoke was getting in his eyes. Then the fire came from both sides. He panicked. He couldn’t see well and the passage was getting hotter and hotter. Then the smoke made the air almost impossible to breathe. Everything went black.