The sixth chapter of Darkhold. Sorry for not posting, but I kept telling myself “tomorrow.” So today was yesterday’s tomorrow. 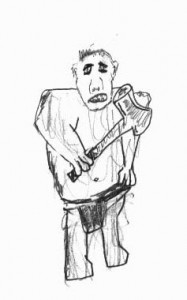 I found a boy in the remains of the burned out part of my house. His clothes were charred and his skin black from soot. I decided that I would bring him to my house and take care of him. I summoned one of my servants and told him to take care of the boy. My servant walked away with the boy and his arms. I watched them walk out of my view and then decided to set my mind on more important matters. I then paid a visit to my old friend Hecta.

When he saw me appear he grimaced.

“Why do you disrupt my meditating, Vlad?” He asked, his eyes piercing into my body.

“Why did you burn part of my house?” I countered. For a moment I thought that he looked surprised, but he pulled himself together quickly and the look was not there anymore.

“And what proof do you have that I am he cause of this unfortunate happening,” He said. and he continued, “And why whenever something bad happens to you blame it on me,” his words were almost spit out. Again, I had managed to make Hecta lose his cool. I had made him call me Vlad. Vlad was the name that I had had hundreds of years ago. It was close to a thousand now. Then all of a sudden he waved his hand and out of the corner of the room came a brutish thing with green skin.

“‘hat can I do for ‘ou master Hecta?” The thing asked in a gravely voice.

“You can… dispose of this imposter,” Hecta said coldy. Almost spitting the words out with distaste. I laughed. That little pushover couldn’t beat me in a fight to save his life.

“‘essir!” The monster said. I pulled the hood of my black coat down and smiled. It was amusing to me that the monster thought that he could actually beat me. It would make this all the more fun. I turned to Hecta.

“Why would you just throw away one of your servants like that?” I asked him. My eyes steely.

“Because he is a tool- ” He answered, but was immediately interrupted by me.

“But why would you through away a tool?” I didn’t get what the logic behind this.

“An expendable tool. An expendable tool that I think can kill you,” he said. I got it now. Hecta didn’t care what happened to anyone else, only himself. Without further ado I walked up to the monster and hit it. Nothing happened. I narrowed my eyes. I willed my hand to get hot and flames burst up around my hand. I willed my other hand to get cold. It started to freeze and a small cloud of cold air floated around that hand. I clenched both hands together and brought them down on the monster. It reached up to block, but I was to strong and it was knocked over. Its body was both scorched and frozen at the same time. It struggled to get up and I hit the monster again. It faltered. Then it jumped up and slammed into me. I was knocked backwards from the force of the blow. I could hear the monster’s ragged breathing and I stood up. It was lying on the ground and looked injured. I took one look at the beast and kicked it as hard as I could, then willed a spear into my hands. The spear appeared and I stabbed the monster. The glow disappeared from its eyes when it died. I turned around and shot an icy glare at Hecta. He looked disappointed. I then willed myself home. I was there one second and the next I was in the room with the boy. I silently reminded myself to get a sword instead of a spear. I mean, spears are good and all, but whoever heard of the valiant knight who vanquished the evil knight with a spear? Swords are much more popular.