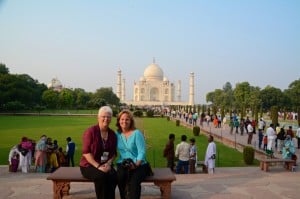 The Taj Mahal, the seventh wonder of the world, means “Crown Palace.” The Taj was built over a period of 22 years from 1632, as a tribute to Mughal Emperor Shah Jahan’s wife Empress Mumtaz Mahal. Shah Jahan had the Taj constructed to enshrine her mortal remains and be a a center of the pilgrimage. It was designed by the Iranian architect Ustad Isa. Shah Jahan was known to have patronized Indian artisans irrespective of religion and caste. 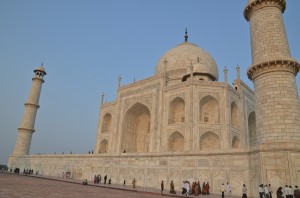 On June 17, 1631, Mumtaz Mahal died after delivering her 14th child. The Emperor had to be summoned from the battlefield to be with his dying wife. Overcome with grief, Shah Jahan promised to immortalize their love. Mumtaz Mahal asked her husband to create a symbol of their love and prosperity. 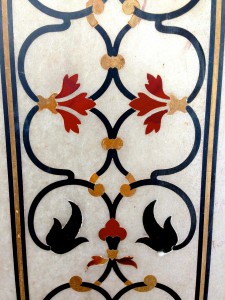 The Taj was built  on the banks of the Yamuna River using marble from the quarries of Makrana. A ramp 21 1/2 miles long was built to haul huge pieces of marble to the site of construction. There are four tapering minarets 136.48 feet high on each corner of the plinth. The minarets not only balance the main structure of the mausoleum, but are also leaning out so a natural disaster will not destroy the main edifice by falling on it. It is said that as many as 35 different types of precious and semi-precious stones were used in the inlay work done on the Taj. Turquoise, jade, agate, coral, lapis, lazuli, onyx, bloodstone, carnelian, jasper, garnet and malachite were used to decorate flowers like lily and honeysuckle.

On either side of the Taj are two identical buildings that are made entirely out of sandstone. While both are mosques, the one towards the west (left side) is important and used for offering prayers, as it not only sanctifies the Taj but also faces Mecca. The replica on the other side is known as the Jawab (answer). 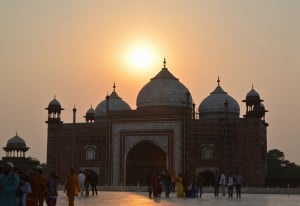 In his later years when he was 65, his son Aurangzeb imprisoned Shah Jahan in the Red Fort at Agra and became the successor of the throne. In the last years of his imprisonment and until his death in 1666, he somehow managed to have a gaze at Taj Mahal through the grill work of the prison, the building, he had dedicated to his wife. 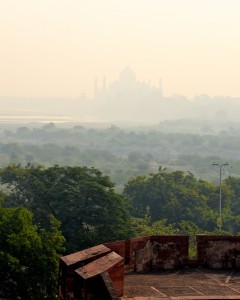