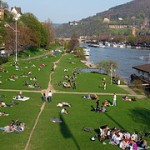 Last year I lived in Heidelberg,Germany. I didn’t speak german and I had never been there before, but I made it. I miss Heidelberg SO much. Yes, things were very hard for me at the beginning but things got easier gradually. We arrived in August and left in August. I was out of the U.S. for 361 days. By October I was communicating with people at school and in town and by November I could actually comprehend most of my classes. Heidelberg is the size of Durham but with a bigger population so it feels very urban. I was very indepentent. I went to school by myself, went grocery shopping for my parents, and went to school parties. All by myself. It was amazing. On the last day of school I cried because I knew that we would be leaving soon. I still write my old class and luckily I am going to visit them later this year. Also, coming home was softened by getting to come to Durham Academy! It’s a great school!

So many other things happened too! So many things I couldn’t name all of them. Among them were the deaths of Amy Winehouse, Elizabeth Taylor, Osama Bin Laden and Gaddafi. Also, there was the royal wedding and the euro crisis.

I know that as much I will miss 2011 I will come to love 2012 as much as I do 2011.  A lot of things will happen. For example, I will get braces and I will get to visit my old class. I hope that you have happy holidays and a wonderful new year, wherever you are and whatever the new year brings you!