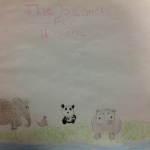 The Search For Home

There once were four animals: a small puppy, a hippo, a elephant, and a panda bear. They were all lost in the woods. The small puppy was trying to find home. Because the puppy was so small it was slower and knew less than the others. The hippo decided that they were going so slow that they would never find home. He decided that if he went by himself that things would go much faster and that he would have a better chance of finding home so he called them useless and left.

The hippo started to run, determined to find his home before the others. He continued to run. Head sweating, paws hurting, the tired hippo ran on. Meanwhile, the others continued walking at their slow pace. One day the hippo came across a stream. He was so thirsty that he stopped for a drink. He leaned down to take a drink and he fell in. The hippo was so tired that he could not swim! He started to yell for help.

The others heard a faint sound but they did not think much about it, they thought it was just little animals having fun. Excited that they thought they had finally found home, they hurried, thinking how much their families must have missed them.

Finally, they came across a the stream. They saw the poor hippo and ran up to help him. The elephant’s trunk could not reach the hippo! The panda bear climbed onto the elephant’s trunk but it was still not long enough. Finally, the smallest puppy climbed on but the hippo exclaimed, “It’s useless, the puppy will never be able to save me!” Paws stretching, arms grabbing, the puppy could not reach the hippo. The puppy yelled for the elephant to get a stick. Once the puppy had a stick he saved the hippo. The hippo told the animals that they are much more useful than he said and he apologized so they continued together to look for home.

5 thoughts on “The Search For Home by Michiko”