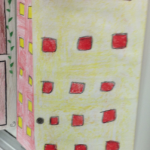 3 thoughts on “Lady Or Tiger by Michael S”