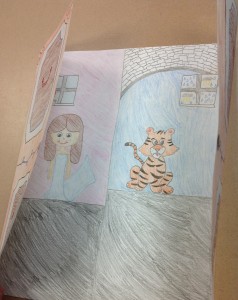 He glared at the doors, heart racing, sweat trickling down his forehead. Cogitating deeply, he thinks of what Princess Ava gestured, was it true that what was behind the door on the right would let him live? “Will she be at peace, knowing that I will leave happily? Or does she seek vengeance of what might become?” he thought. The doors angered him, knowing that what was behind them would determine his fate.

They were dark brown, the doors, to match the suave, brick amphitheater. The king delighted to see the youth in the arena was in a purple velvet robe and had a untamed look in his eyes. He looked over at his daughter. She was focused completely on the youth she was once courting with mourning in her eyes. The amphitheater smelled of leather and lime.

His saw agitation around the room and stepped an inch closer to the doors. About to grip the doorknob of the left door, he thought of how the Princess looked at him, nervous, but her face filled with love. He moved over and opened the right door.

Out came the celebration, along with one of the fairest maidens he had ever seen. Princess Ava was genuine. And so, the youth was married happily with a blessing from the Princess. As they left the amphitheater in joy, the crowd went wild in excitement.