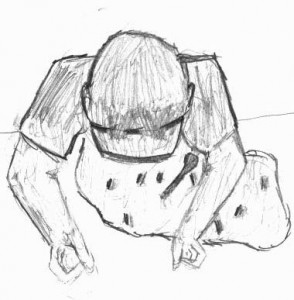 Here is the first chapter of my story.  Please comment below by telling me what I need to improve on or whatever else you want to say about my story. I hope you enjoy!

John woke up with a grunt. He had had a very strange dream. He had been some sort of creature and had faced a man named Hecta. But it was just a dream. Just a dream John repeated to himself. It seemed so real though. Breakfast was fine, but his dream was still haunting him. Who was he? John did not know a Hecta. The only person he knew whose name started with an h was his best friend, Henry. It was all very strange. Maybe it was just a hallucination. It was so real though! Hah! What was he thinking! It was just a dream! Just a dream, he repeated to himself to calm his nerves. This would be embarrassing if people knew I was taking a dream seriously. The door squeaked when John opened it. A draft of cold air swept into the room and he pulled on a sweatshirt so he wouldn’t feel the cold as much. All of a sudden a voice said, “Come to me.” He looked around. It was just me. He started walking to school. The walk was long and tiring and he arrived to school five minutes late. He heard the voice again, “Come to me.” This time it sounded like someone was saying it right into his ear. John almost jumped. Again John just shrugged it off as himself, but throughout the day he kept hearing the voice. It was as if he was going crazy. The more John thought he going crazy the more it became the truth. The more he heard The Voice. It seemed that it was his own brain thinking it, but it wasn’t. John was distracted in class and couldn’t remember any of the things that I had read the previous night. When he got back to my house no one was there. That was strange. His parents were always there. Plus they would have left a note. Strange. He shook his head. Even though John was confused he just did my homework and waited for them to return. They didn’t. He made myself dinner and waited for them to return. They didn’t. It was all part of some plan. They just forgot to leave a note. He convinced myself that they would come back. They didn’t. John woke up in the morning and could already tell that that day was going to be bad. For a start he woke up discombobulated and then spilled his cereal all over himself.