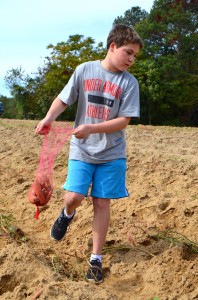 When our advisory went gleaning for community service I was excited for this but when it became a competition we started working harder. The bags kept coming and coming and so did the potatoes. There were some big potatoes and some small potatoes. My partner and I started to come up with a system for gathering potatoes. The system was that I was bagging the potatoes while he was picking them and bringing them to me. This was a good system until we noticed that the other group was gathering more potatoes than us. The worst thing was that this didn’t start out as a competition but it gradually kept getting more competitive as we went on. It ended up that we had 80 bags in all which is 800 pounds. I think that we did a good job with this community service project and it felt good to do for others.

One thought on “Community Service by Vasili C.”