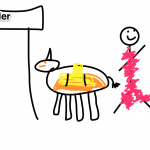 The Picture was made By Katie

In my class we picked at Wisdom Tale and made a comic telling the story. I chose The Smuggler as my comic. I chose The Smuggler because it was a funny story and it was one of my favorites. When we started the project we first chose a theme for the comic and then we drew pictures for the comic we chose. I chose to draw my pictures in Skitch. I chose to use Skitch because I can draw on an iPad and then pull up the picture on the computer without emailing them. Next we added dialogue and checked it to make sure it was correct . The project was really fun and I liked it lot.

2 thoughts on “The Smuggler Comic By Katie C.”