​As Thursday rolled around, the Wheel of Fortune match was on. I was going to compete against a taciturn young girl named Makenzie, and a lugubrious man named Leland. On my way to the podium I was pinioned to the wheel so I couldn’t get up. That gave me a small nodule on my forehead. But I didn’t realize it until I was prostrate from passing out. I picked myself up and went to my spot. That sure was soporific!
​The first spin was complete maelstrom. The rest of them were really calm though. Then suddenly Leland spun the million dollar award. He let it oscillate in a tantalizing way. On the last play I went bankrupt. I left completely saturnine. I failed.

My book is titled I’d Tell You I Love You, But Then I’d Have to Kill You. It is about a girl named Cammie who goes to a spy school. Her mom is the headmaster of the school. Her dad went on a mission and never returned. This is the type of book that you can never put down. It has suspenseful moments on every page. I am only on page thirty, but I already know that I love this book and recommend it to everyone! 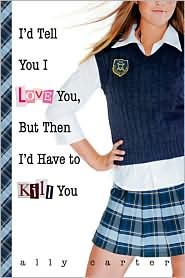 My book is a sort of scary but in a twisted way book. It is called Miss Peregrine’s Home For Peculiar Children by Ransom Riggs. It is about a boy named Jacob whose grandfather has told him crazy stories about his life on a small island where there is a home for “peculiar” children. But these kids aren’t just peculiar, they have amazing powers. Many years later Jacob doesn’t believe his grandfather anymore. Later, he gets a crazy phone call from his grandfather saying that he is about to be killed!!! And thats where I have stopped reading. DUN DUN DUUUUUUN!