I think iPads for sixth grade are very helpful. When you need to do something, like go on a website for school, you can just get out your iPad and go to the website. There are many apps to help you get your work done. One of my favorite apps is calendar because I can write down my homework for the day. Some more apps that are helpful are Sketchbook x or Doodle Buddy because for blog posts and other things, if you need to draw a picture, you can use one of the apps. My favorite app is Evernote because you can take notes on it or your teachers can put something there and you can see it. I like the iPads and think they are a helpful way for sixth graders to learn. 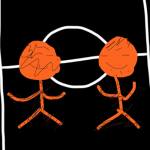