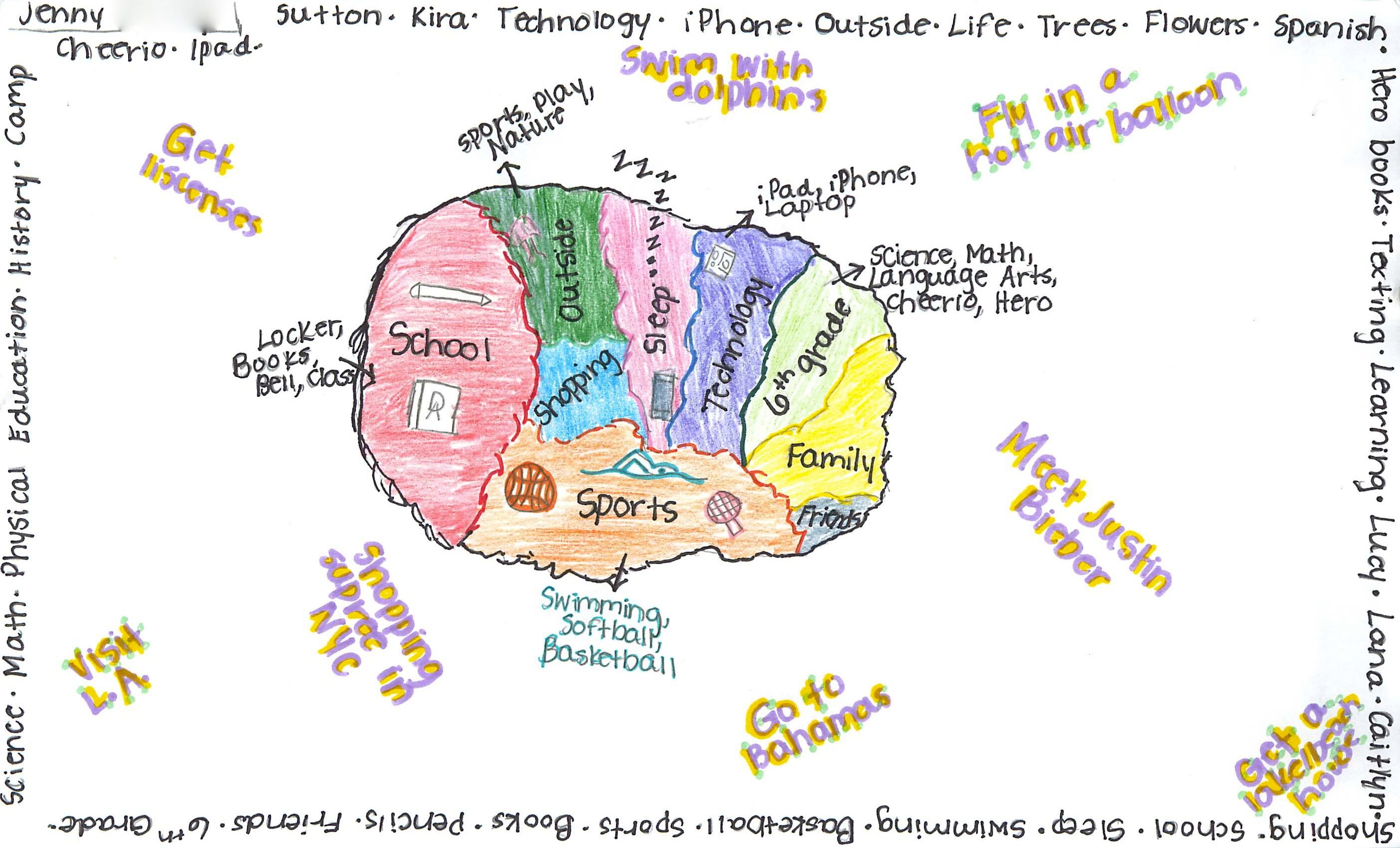 To wrap up the year of projects our last project was to draw our brains and put the things in it that happen in our everyday life and that relate to our life. One thing I put was school because I come to school every day except for the weekends and this is where I get my education. I also put technology in my brain because technology has been helping me a lot in school lately and I use it out of school. Another thing I put in my brain was sports because sports keep me healthy, they keep me in shape and are a good workout. I also put my family and friends because they are a big part of my life and help me with things when I need help and always have my back. These were the things on my brain. What was on yours?

At the beginning of our school year every student at the middle school got supplied with an iPad. These iPads are great for taking notes during classes, playing games to help us study, write down our homework, and other school needs. I like the iPad to help me write down my homework and also use it for class work during class, but overall I wish we did have laptops. Laptops would be good for some occasions but they would be kind of hard to carry around. iPads are a lot more helpful too because they are super easy to carry around and fit perfectly in a bag or backpack. I do really like iPads and I hope I get to use them a lot longer.

Through this year the sixth grade has gained a better way of learning new vocabulary. We have found a way to learn new words with different ways of studying them. There are circle graphs, a page with all of the information about that word and much more. I really do like this way of learning new words on Membean because a huge difference has been made from the middle of the year, when we started using Membean, to finishing off the year now. I am glad that we started using this and I hope it becomes even more successful. 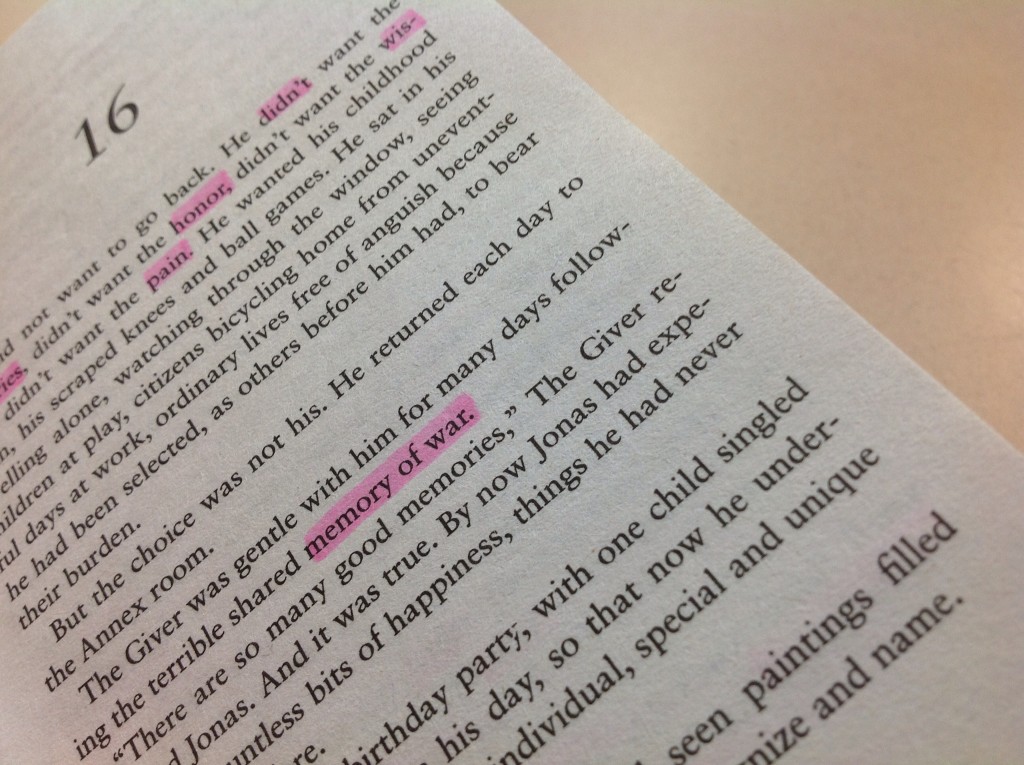 In The Giver Jonas is being told many memories that are happy and sad from the Giver. If I was the Giver I would first give away the memory of memory of war. In this memory, a boy rode a gleaming brown horse across a field that smelled of damp grass. This was also a memory of pain and loneliness. In this memory there was lots of blood and horse riding, and it was very sad.

I would give this memory away first because it is a very sad memory, and I would want to give away all of the bad memories first. I would want to give the bad ones away first because after you go through your little stage of sadness hearing all of these sad memories you could hear all of the happy and joyful memories at the end to cheer you back up! This is my opinion of how memories should be told, what memory would you tell first?

In the book, The Giver, by Lois Lowry Jonas and his family unit live in a perfect and ideal community. Everything is the same and so perfect because the leaders committed to sameness. I think that the Ideal Teacher would be a great teacher by helping students when they need help. Not giving a ton of homework but just the right amount that would be needed. I don’t like it when teachers give tests or quizzes like every other three days or one every week, but sometimes it’s ok, so not that many quizzes would also be a great teacher! I like it when teachers explain things well like the activities or projects we do, because sometimes teachers don’t always give great explanations and it is kind of hard to complete the task we are given. These are my thoughts of an ideal teacher, what are yours? 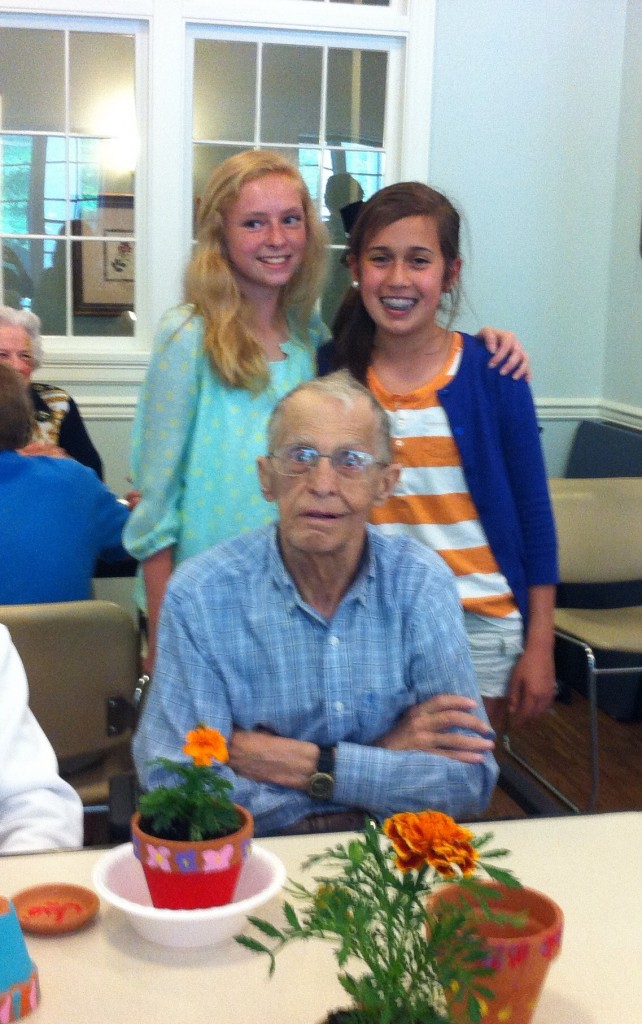 For our last community service of the year my class went to the Spring Arbor Community Home. We got to talk to elders and help them make a flower pot. We painted the pots together and then inserted soil and a beautiful flower that would grow if it was taken care of. This activity was actually very fun. It was fun getting to talk to old people, and talk about their younger life and what they liked to do, and if they still have any hobbies. One elder told me her story about how she had a cat that she found on the side of the road when she was younger and still has that cat today. Its name is Boy. Towards the end, a therapy dog came and did some tricks for us , the dog was named Riley. He jumped through a hola-hoop, spins in the air, and did a cool trick where he would find the treat out of three cups. I reall enjoyed going here, and I hope I go again soon!

In our Language Arts class we are reading The Giver by Lois Lowry. From your birth to twelve years old there is a ceremony for each one of your birthdays. After you have turned twelve you are on your own. Well, when you turn twelve you get an assignment.  If I was assigned a job I would think that my job would be to do lots and lots of yard work, and always make the yard look good as new. I think I would be assigned this because I really enjoy the outsides and if someone gives me a job that’s outside I usually go right ahead and do it. Another reason I think I would be assigned this is because I sometimes do help my parents and neighbors with their yard work and I take pride in it! 🙂

For the last part of the third quarter and through most of the fourth quarter we read the “The Westing Game” which was a cozy mystery. I really liked this book, it’s especially way better that the book “Cosmic” that we read. My favorite part of this book was when everything was revealed, and it was really cool and interesting about how everyone changed from the beginning of the boom to the end, there were some major changes! To find out what all of the changes and cool facts were, read this book. It is very good! 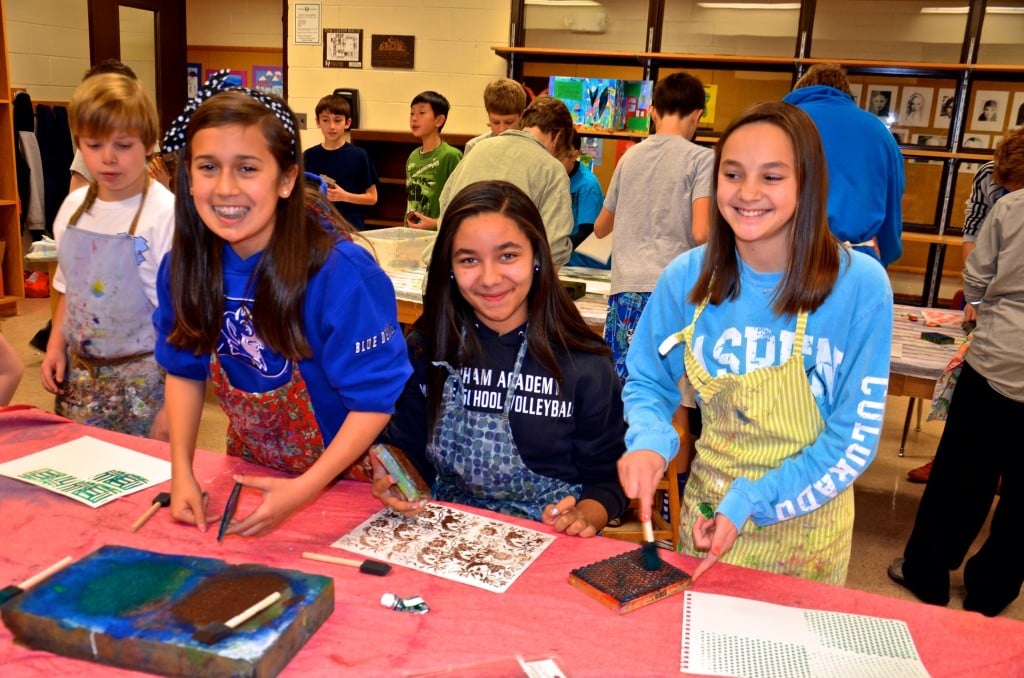 In the sixth grade language arts class we did a project on a person who is a big influence in our life, in other words our “hero”. My hero is my dad. During this project we had to create a handmade book with a cover and back cardboard made by our lovely guest appearance “Peg Gignoux” who included our work with hers in the Frank Gallery. During this making we painted sheets of paper with stamps, and cut them up and pasted them onto our book of our liking. We then typed up paragraphs talking about our hero’s life story and how they are important to us. Once those got printed, cut, and glued in our book, our books were soon enough on their way to the Frank Gallery on Franklin Street for public views. 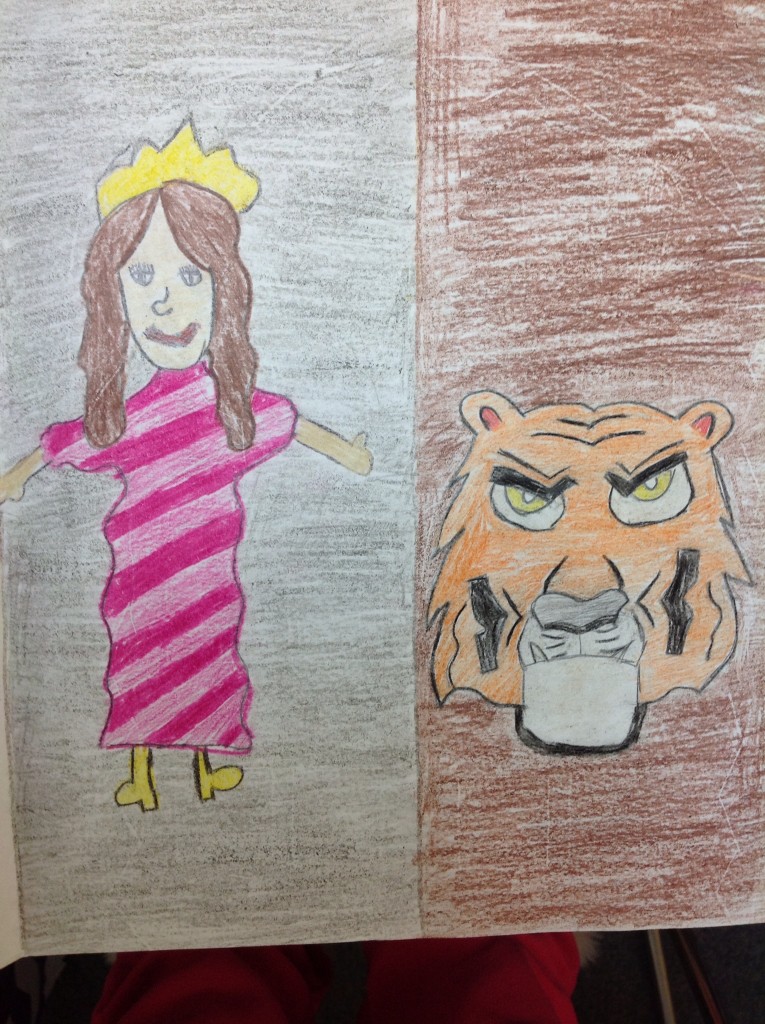 In the LA Blue class, we read a story called the Lady or the Tiger, and it was about a man who wanted the lady behind one door but the tiger was behind the other door and he had two doors to choose from, but he didn’t know which one to chose. So, everyone in my class made an ending to the story about what they thought would happen, and here is my part:

The young, desperate, and handsome man walked down the aisle deciding which door to open. Both of the doors looked exactly the same, so he couldn’t decide which door he was going to open. But, the semi-barbaric princess waved her hand to the right to tell the man to open the right door. The lady really did not like the man because her father, the luxurious king, disagreed that they should get married. The beautiful and wonderful lady always went by her father’s rules. The lady was behind the left door.

From a long, long time ago in that kingdom, all of the servants, peasants, the king and the queen, the princess and the prince, and other fellow workers had a talent show. Once it was the lady’s turn at the talent show, she did a tiger’s growl and roar. She sounded so much like a tiger, so from that day on she was known as the tiger woman because of her outstanding roar.