Sabriel is the daughter of the Abhorsen. She lives in ancelstierre, a city that is separated by The Wall, from the Old Kingdom. Sabriel’s home is in an all girls school in ancelstierre. Her father, The Abhorsen, is a Charter Necromancer. But unlike the free magic Necromancers that raise the dead, he binds them, and sends them through the Nine rings of death. Necromancers venture into death to raise the dead. But when her father is trapped in death, she must venture into the Old Kingdom to save her father, but in the process, she will find something that reworks her life in a new light. But will she survive her venture into death itself? Find out in Sabriel, By Garth Nix.

The man opened the door the slightest bit. The Jade and Diamond Door burst open, Pieces of crystal shrapnel flying everywhere, the tiger instantly pounced, jagged claws but when it landed, there was nothing in its scarred orange paws! It hesitated for a moment, a split second, but that was all that was needed for the man to jump on the tiger! He puts it in a deadly headlock, cutting of it’s airway, the tiger struggles, trying to get him off! Suddenly, it finds purchase on the mans scratchy clothes and flings him off its back in to the festive purple colosseum wall. The Princess, in desperation, rips the sword from her father’s belt and throws as far as she can towards her lover. The many hopefully leaps into the air, catches the spinning and gleaming sword and plunges it in to the deadly tigers neck, killing it instantaneously. There is awkward silence until there is an amass of cheering from everyone in the colosseum, except, for the King. He yells for silence and it comes. But after a while of thinking he stops, gets up, looks at the man and starts clapping slowly. The man has a smile slowly spreading across his face as he realizes what just happened. His lover rushes down the stairs and throws her hands around him, proclaiming her love for him to the world. Silently, the king thinks to himself “Any boy who can defeat a tiger in battle, is a son of and a well deserved one. Yes I agree he will be very good for my Daughter, who’s beauty surpasses that of all the gods.” And so with reader, you have learned that love may not be the powerful force in the universe, but it is certainly a force not to be reckoned with.

Once there was a Dragon egg. This egg seemed normal, except for its strange color. It was a brilliant shade of a color that no one could exactly describe. He was born to a pair of normal dragon parents. When he hatched, he was that same brilliant shade. The next day when the mother went to check on him, he had turned another shade.

This kept happening until the baby boy dragon was eight. He would be a different shade every day. He learned flying almost instantly. The other dragons would make fun of him, over and over. But, the day he turned eight, he suddenly realized if he focused enough, he could become whatever color he wanted. His favorite color was the that brilliant shade, that no one knew. He started using this to his advantage by blending in with his surroundings.

But as he got older, watching everybody else grew the ability to breath fire and ice, gas and plasma, and the assortment of other abilities, he realized he didn’t have any of those abilities. All that came out was air. But as another trade off, he was so exceedingly fast, no one could ever win a race against him.

Now some of his old enemies were badgering him even more, calling him names and asking him to change colors. He simply ignored them and kept going. One day in school, he could handle it anymore and roared as loud as he could, and them something happened, he started spinning his tail, spinning faster, faster, faster, faster, until he was a spinning tornado of spikes. He hurt many of his enemies, but he got sent home early. His parents were so shamed that they disowned him and banished him. He left wandering the skies.

While he was wandering, he came across a wizened old dragon, sleeping in his cave. Using his skills, the young dragon hides himself and starts creeping towards the old dragon. The old dragon awakes and looks around. The young dragon freezes as the old one looks exactly where he is standing blended. The old dragon moves so quickly the young dragon has barely any time to move. He has the younger in his hold! The younger dragon lashes his tail, knocking the other dragon back, and gets ready for a devastating blow! But as the tail is moving towards the older dragon, his tale is grabbed and he is flung against the wall! The older dragon pounces and hisses, “Give in and your life will be spared.” The younger dragon nods in terror and relaxes.

The old dragon drops him and starts walking away when the younger dragon asks, “What’s your name?”

“Wait, you’re not the Florn, the one from the ramavger wars?!?!” says the young dragon questionably.

“That is so awesome!!!” Says the young dragon enthusiastically.

Florn raises his brow ridges and starts walking again, stops, turns, and says, “Just for the sake of keeping things simple, what is your name?”

Florn sighs and says,”Please tell me you have a name.”

“Ummm…” Florn sighs again and says “Well, we will just have to name you now won’t we.”

“Ok!” says the young dragon excitedly. “Now why don’t we get some sleep and we’ll name you in the morning,” said Florn exasperatedly.

They both slept soundly that night. When they awoke, 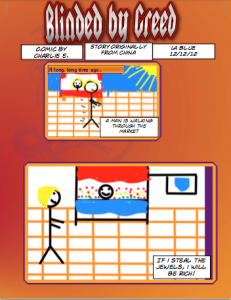 My Comic was on the wisdom tale “Blinded by Greed.” In this story a man is walking through the market. He walks past all the stalls, until he gets to the jewelry stall. He realizes to himself that if he steals all the jewels he would be rich. He grabs handfuls of them and starts running. He is trapped by the crowd until the policeman gets there. While in jail, he is asked why he stole all those jewels in such a large crowd. The man simply replies, “I was blinded by Greed.”

My moral idea for this story is do not let greed get the best of you. My experience with the programs I used, Skitch and Comic Life, have led me to dislike Skitch greatly and I have come to love Comic Life. I dislike Skitch because there are only a few tools and it is missing to many basic writing program tools. I love Comic Life because there is an abundance of different mechanics and tools. I think this project was very fun. 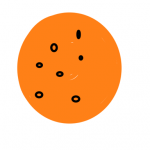 I am thankful for my siblings. They taught me how to be annoying, how to cook, how to whittle, how to tie knots, how to play British bulldogs, How not to die during steal the bacon in scouts, how to make cookies, how to make brownies, and most of all, how to stay out of my parents way when they are angry. My brother and sister are one of the most important things of all in my life, but if one of them saw my post, they would most likely mock me in some way.

Most people think of Fencing as just another thing that is outdated and is not very cool. Those people are wrong. Fencing is possibly the coolest sport ever. It’s fun, it’s hard, and best of all, you actually start fencing about two months after starting training, and come out pretty well. In fencing, it all has to do with strategy and timing. You can train for years and still lose because your opponent just has a better strategy.

Fencing is composed of only a few things you need to learn: Advance, Retreat, Attack, Parry, Feint, and Lunge. With these few things, you create combinations, like advanced lunge, beat attack, Remise, offensive parry, etc. Now most fencers are also relatively good referees. I am not a very good referee at all. In the Olympics, it may look easy, but it is not in fact easy to just hit them and be done. The strategies they develop are probably the best on the planet.

Fencing is a solo sport but not at all solo. For fencing you need to able to be hit pretty hard without flinching on order to continue. I would recommend fencing strongly, and if you are going to fence, Mid-south fencers club is the place I go and it is awesome! I believe one of the teachers, Jeff, teaches after school here also. If you have any questions please do ask. 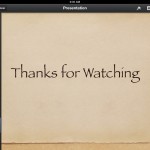 My project is about punctuating dialogue. When a character/person is speaking, the punctuation goes on the inside of the quotation marks.

Example: “That cat never listens to anything I say!” 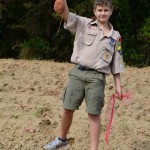 We went a spud pickin’. It was pretty fun, and not too hard also. It was a good, easy, yet challenging task that requires teamwork for the best outcome. I am in fact surprised that we actually have not done this before in Scouts, but we would probably end up eating the spuds we picked. Of course. Will K and I, working together, picked over 400 pounds of potatoes. Overall, it was pretty fun pickin’ da spuds. What did you think it was like, and if you didn’t do it, what did you do? Answer in the comments section below!

Hey guys, It’s Charlie. I’m just going to do a quick review of “Maze Runner” for my first post.

He awakes in a dark room. His name is Thomas? Yes, it has to be, but he can’t remember anything. Suddenly the doors open and Thomas is delivered to a place called the Glade,  with with boys called Gladers, people who were delivered by the exact same root. For over 2 years, new Gladers have been delivered each month. But outside the glade the maze stands ominously tall. The maze at night is filled with egregious creatures called Grievers. Together with friends, Thomas explores the maze with questions. But then A new Glader comes, signaling the closing of the glade. It’s now or never to escape this horrible place. Will they make it, or will they all be devoured by Grievers?!?!?!? Find out by reading “Maze Runner” by James Dashner!