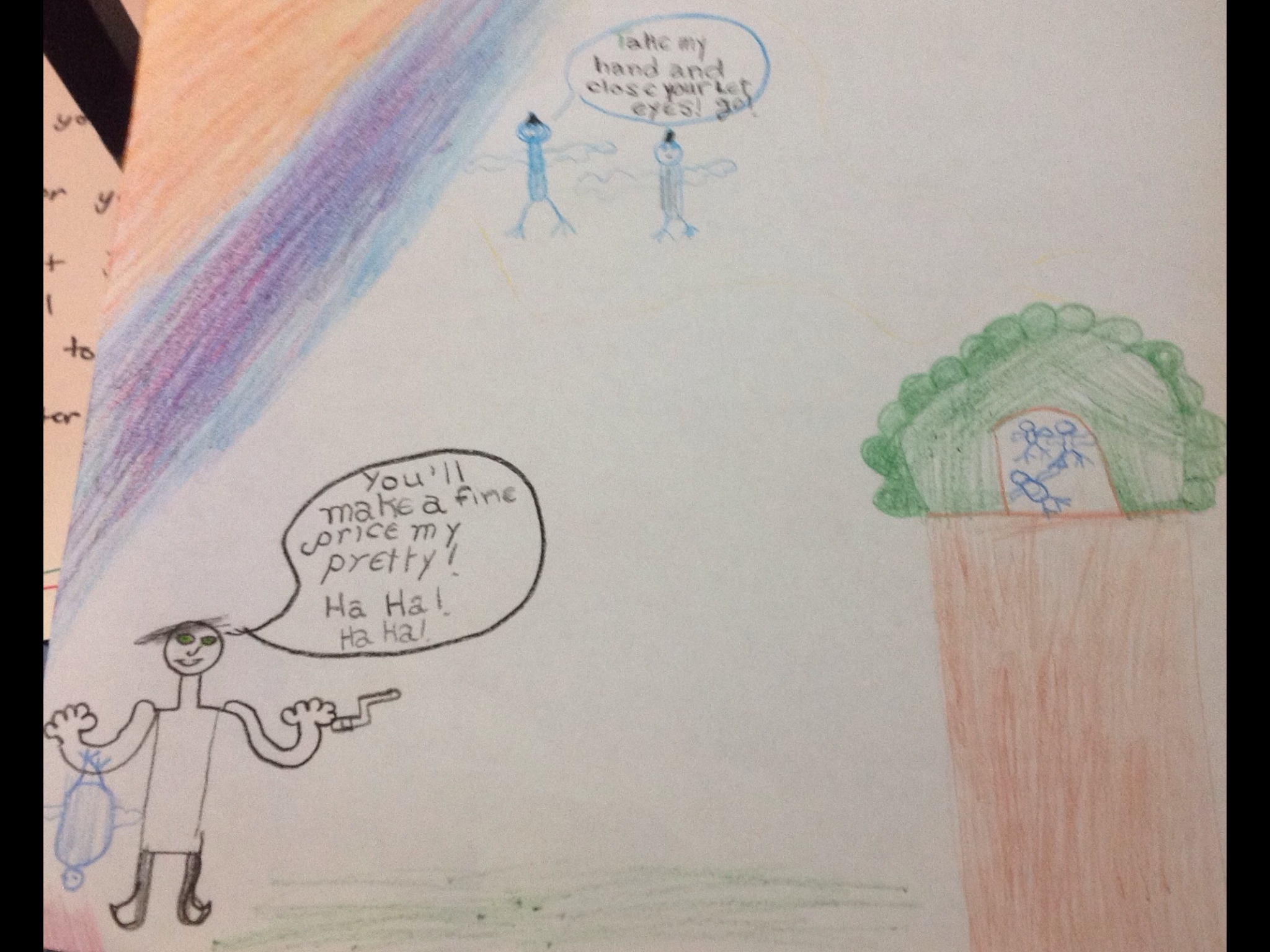 Love Can Never Be Separated

There once was a mother bird who had three children named Robert and Isabel, the oldest children, and Matthew the new-born baby. The mother’s name is Kate, and Kate has lost her dear husband, Jim. Many times a month she tells her children the great tragedy of her husband’s death.

There was a clever merchant with a gun searching for a bird to sell at the market. It was at that moment, when the hunter was in the woods waiting for a bird that Matthew was born. The father came out of his house to get food for their newborn son Matthew. On his way out the mother watched him fly swiftly through the air, the children were inside playing games with Matthew and trying to give him lessons. The mother then sees with her own two eyes her husband fall out of the sky while the gunshot was fired. She rushes out to him but then sees the hunter and ducks behind some bushes. She sees her husband being carried away by the hunter; since she did not know what to do she waited until the man had disappeared.

She flew back home with some food for her son Matthew and tells her children that she decided to get the food because the father had to see another bird for some flying advice. The next day she told her children the truth about what really happened to her husband.

Three years later she goes out early in the morning to get breakfast for her children. She goes straight down towards the ground for some worms or snails. She hears her child Matthew slip out of the nest and acts quickly. She darts forward, like a bullet, catching her head-shaken child and brings him back to the nest. She darts back down for food unaware that the same hunter that killed her husband was aiming at her.  A gunshot goes out and she plummets to the ground; dead she was. She sees her husband reach out for her with his wing and she takes it with hers and flies up into the sky, leaving everything else behind.

Moral: You are always going to feel trapped in life, but now your spirit is free. 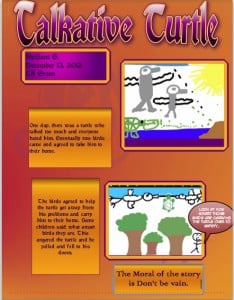 Our 6th grade LA Classes had to make a Comic Life Presentation on a Wisdom Tale of our choice. I did my Wisdom Tale on a story from India called Talkative Turtle. It is a story about a turtle who has no friends because he talks way too much and he is very selfish. In the story, two birds fly into the water where the turtle is pondering about his problems. He tries to become friends with the birds and then asks, “Can I come back to your home with you?” The birds agree and carry him on a stick attached to their beaks. Some children say, “What smart birds. They are carrying that turtle to safety.” In the end, the turtle yelled at the children and he fell off the stick to his doom.

I enjoyed this difficult mind-boggling test because it was open note and very long. It was difficult to figure out what each question was and the essays were soo long and hard. I am very glad that this is not every week, otherwise I would be staying up until midnight! Anyway, I thank you Mrs. D. for the hard, long and difficult test! 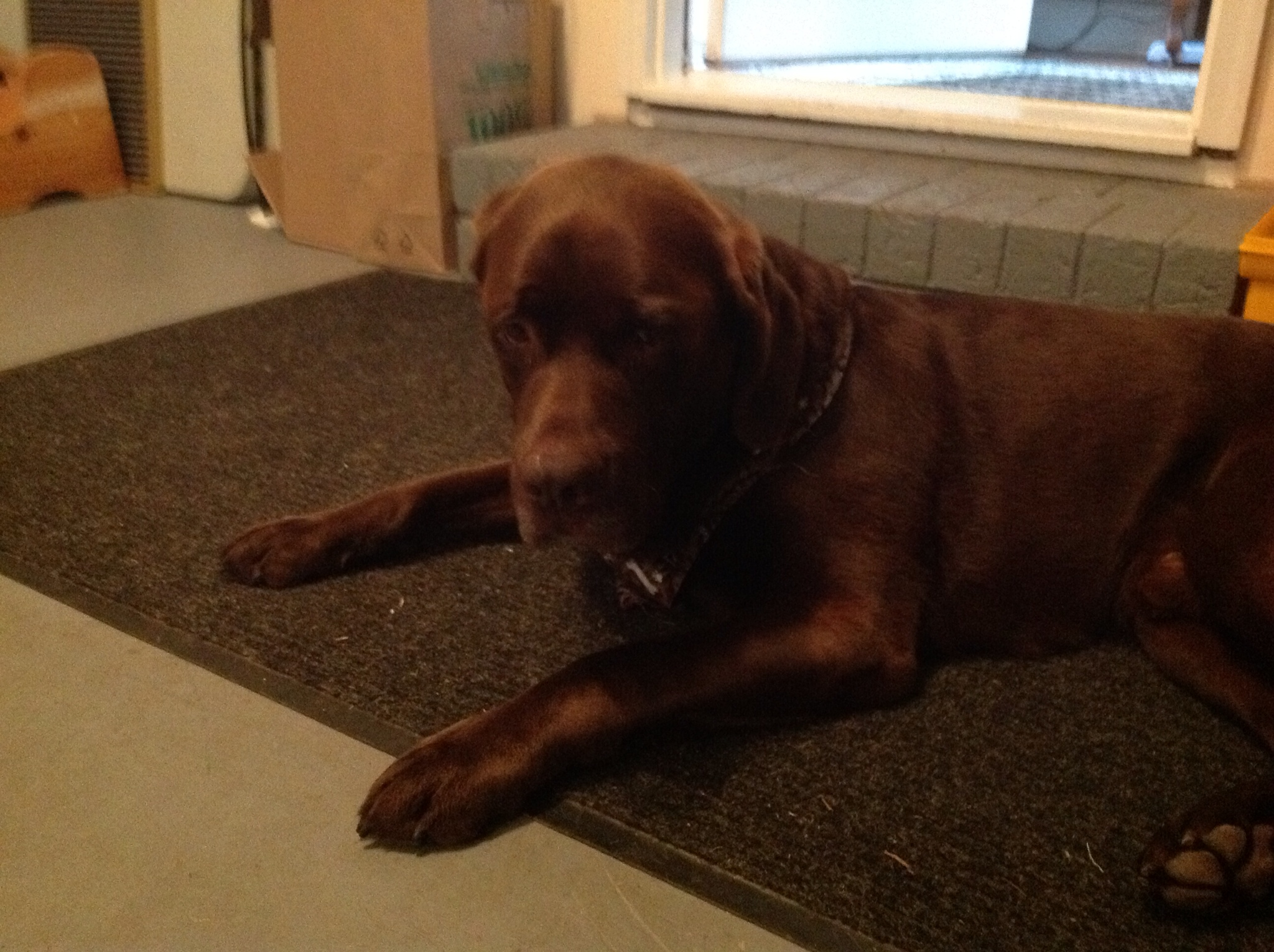 I am grateful for chocolate Labrador Monte. Monte is 8 years old and loves food even though he is only 70 lbs.! Monte is energetic and plays with me and my brothers every day. Our family often enjoys playing our favorite prank on him. We take a paper grocery bag and put it on his head. He then angrily tears it off his head and begins the show. He attacks the bag and rips it into a hundred pieces and then wags his tail for another fight. He loves to go on walks and enjoy our company. He is a great companion. Our family loves him and I am proud that we have Monte for our dog.

Do you ever get the feeling that you are being watched? I do. Do this turn around in every direction and put a menacing look on your face. Then if someone or something is there you are ready for a surprise. Always stay alert and nothing humiliating or bad will not happen to you. You can learn from the mistakes your make like this. Do not be scared of anything and do not be taken by surprise.

I did a Keynote on this project and it was really fun. My project was pretty easy making the run-on sentences because probably every time I do a worksheet I usually have a run-on. So I thank Mrs. Donnelly for having us do a grammar project, otherwise I would still be writing run-on’s which would be bad. 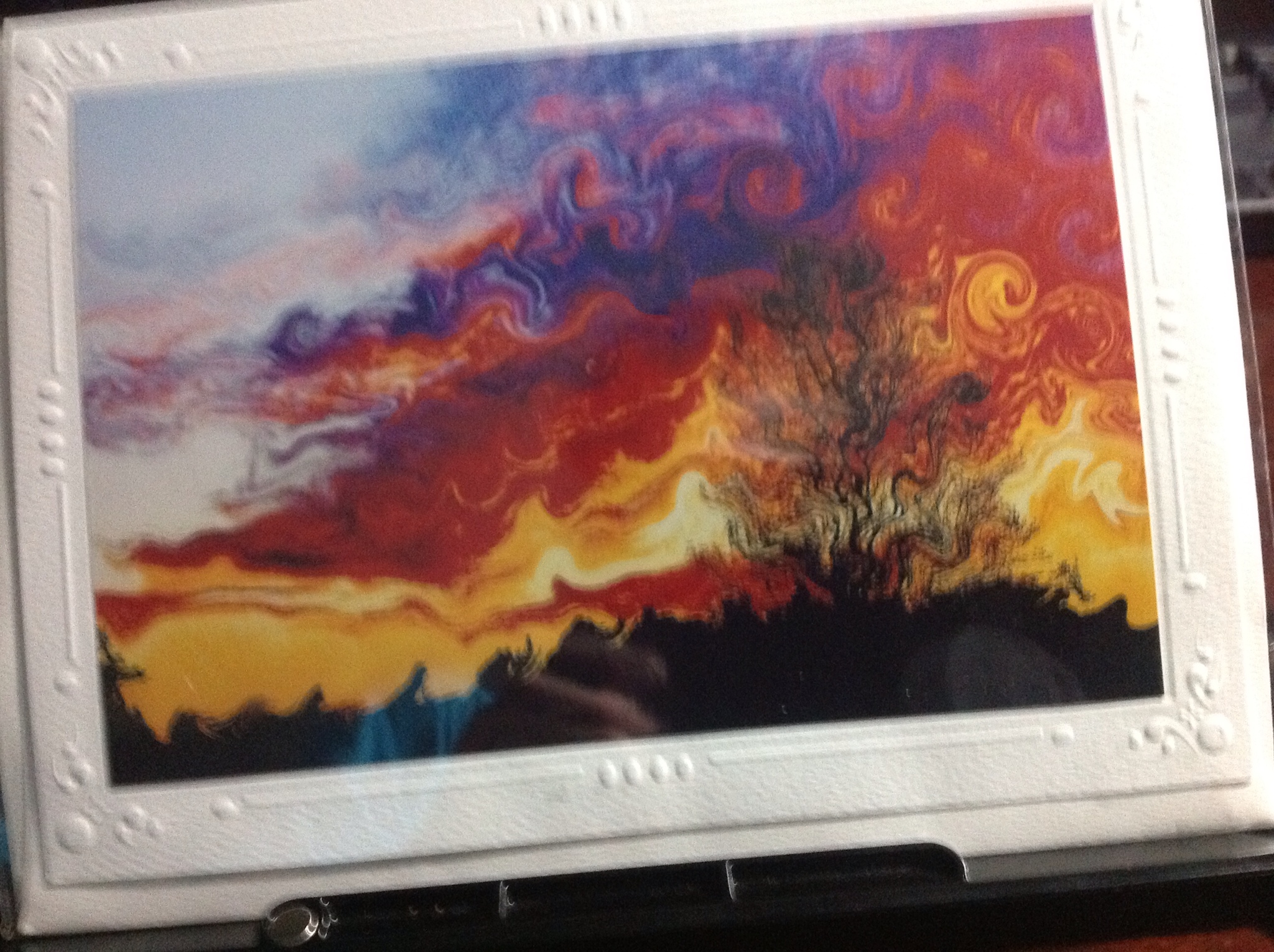 On October 17, 2012 our School, Durham Academy, half of the sixth grade, went Gleaning for the society of St. Andrew. There were three fields of sweet potatoes and those fields probably covered 25 acres but we only worked in one field. They were so big! I worked with David and then tried another group. I went back to David and to my surprise he had joined two other people. Then I found Lael and Will and knew that I would enjoy working with them and they would enjoy working with me. On the other team there was Keenan, Nathan, Michael J., Jack A., and Mathew. We luckily beat them because my team grew. Our team was now Will, Lael, Fred, Tanner, David, Matteo, Chris, and me. Luckily, we filled a total of 125 bags of potatoes. Keep in mind each bag is at least 10 pounds. Then we finished two hours of hard, fun labor that will feed people in need of food in our county. 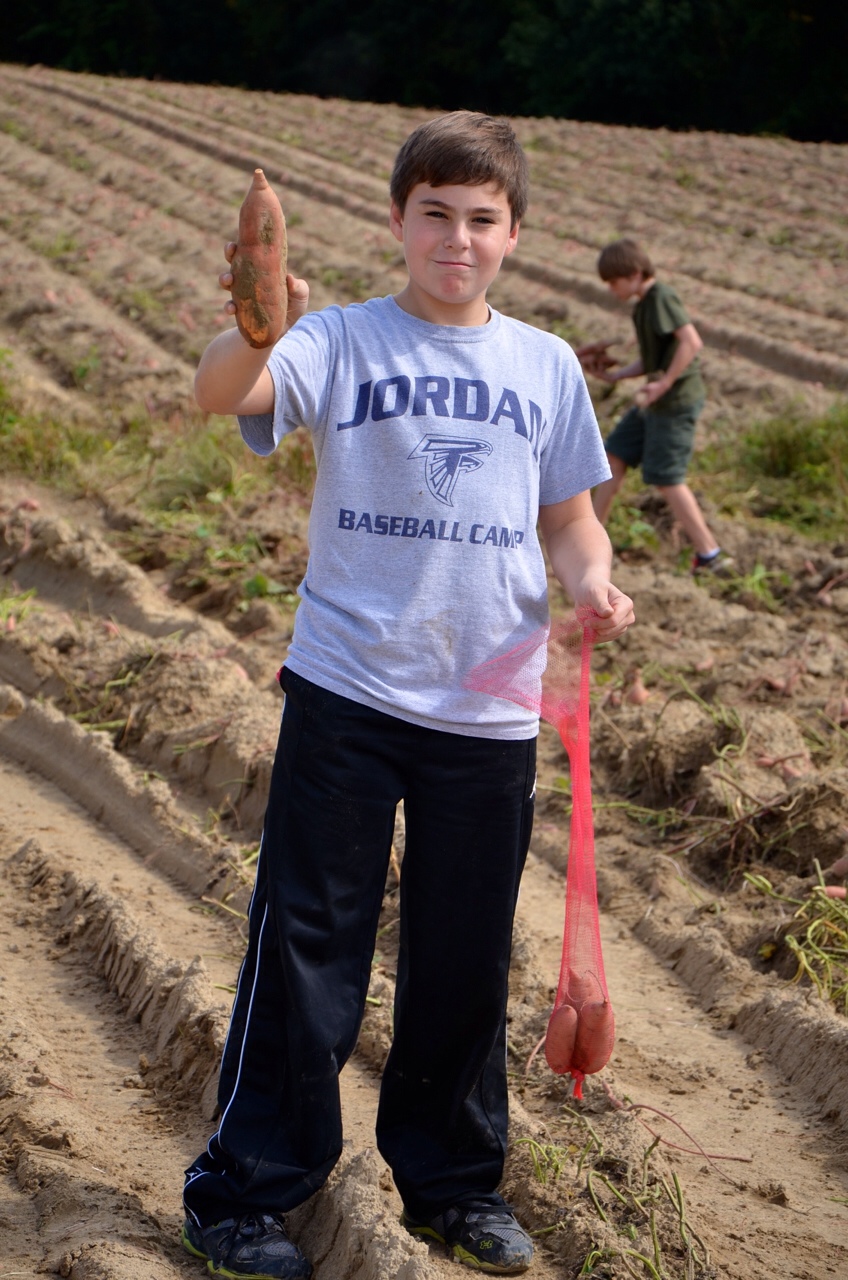 I am going to tell the world what I did at Camp Cheerio and what I thought were my favorite activities. My favorite activities were the challenge course which included the hard rock walls, archery, and the Vertical Playpen. I also enjoyed the zipline, the mudslide, canoeing, and hiking. 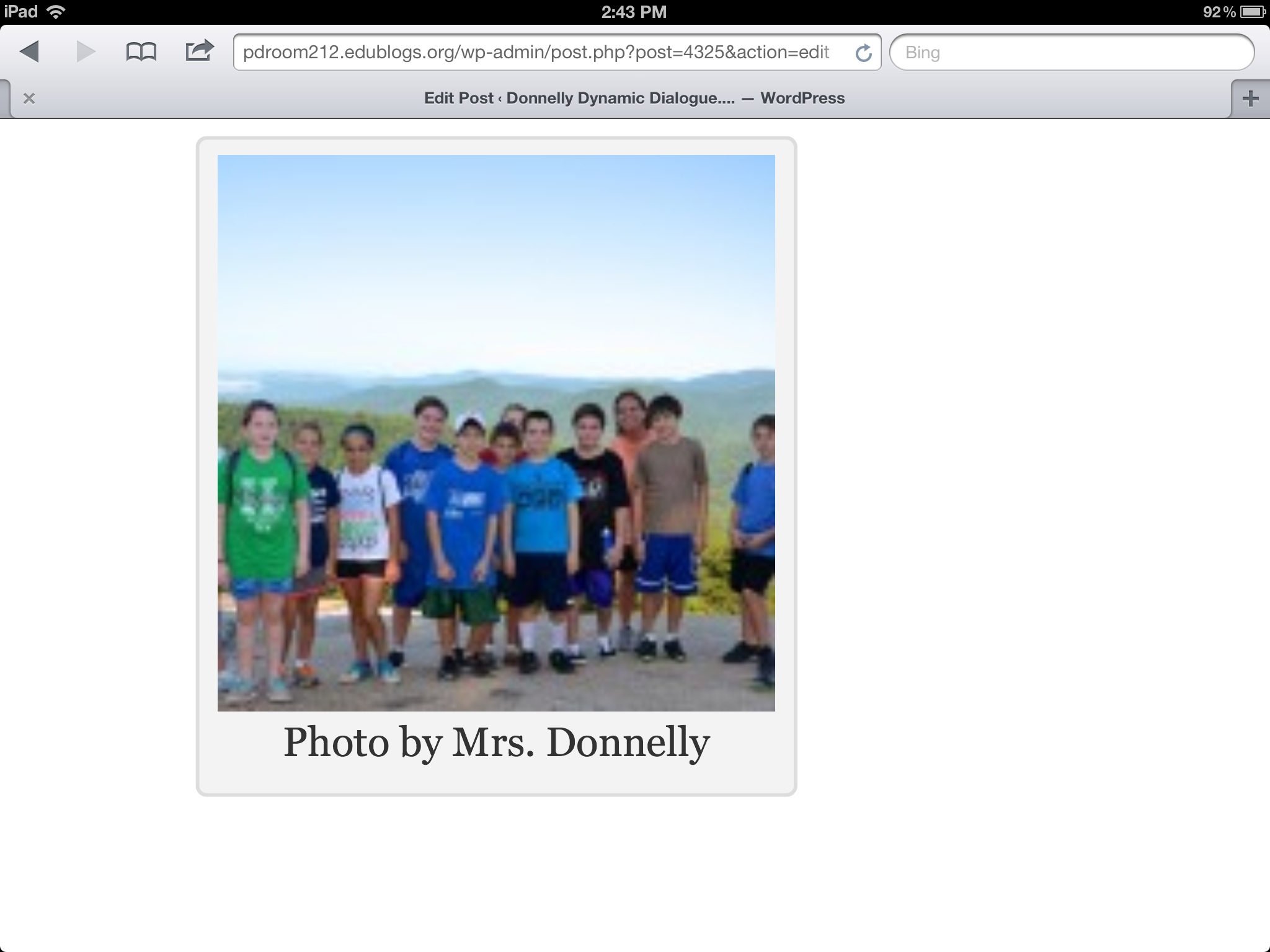 What I liked about the challenge course was that the rock walls were very difficult but my friend and I scaled the first wall with no problem. The next wall was the hardest one of them all. We never even made it halfway, so we just decided to come back to it later. That when I saw it a poisonous caterpillar. So then a counselor took a stick and moved it away from everyone. Then my friend and I had a short blurb about it and I said I thought that the poisonous caterpillar exists in Asia; apparently I was wrong. Then we tried to do a different wall but we never made it. Then we did archery it was really fun I pretended to be Katniss Everdeen from the Hunger Games. In my best round of archery I got 17 points with 5 arrows. It was really fun and challenging. Then we did The Vertical Playpen. The first obstacle course I was stuck on one part for like 9 minutes. I made it up onto the tire then the second tire and touched the post which means I win. I also did the Stairway to Heaven. It consisted of a bunch of wooden poles that got higher and higher as I climbed.

I am proud of climbing to the top of the Twister at Camp Cheerio. Because the twister was very hard it consisted of two nets, a wire, this wood with small pegs, two tires, and wood blocks. I am also proud of that Mr. Hardee who is my martial arts teacher and teaches me Jiu-Jitsu. Our tech project was about Google Docs, and we taught you how to share and create a document. Making the presentation was filled with difficulties, and as soon as one was solved, another would pop up. Our first problem was figuring out how to film it. I thought that Quicktime Player wouldn’t be the full version, but fortunately I was wrong. The next was making the script. This quickly got finished, but then we realized it wasn’t complete. There wasn’t a beginning or ending. Having three people working on one idea was very hard. I would think of one sentence, while someone else would think of something else to put in at the same time. Right as we finished it, the bell rang ending the period. Josh wouldn’t be to record because he had made it into the state championships for the geographic bee (he did well with 5/8 questions right). I am surprised that Sam actually could read it when we recorded without mentioning his hero, a time traveling snail, in fact, he did very well. With the time ticking away, we went into the two computer labs, only to find them full with French students in study hall. The fifth grade pod was full.  Our last resort was the classroom, which was very loud with the other students screaming as the teacher played their finished projects. We finally finished the project only seconds before the bell rang. We were a little off, but it was still good.