Open note tests are not really easy. Just because they’re open note does not mean that you don’t have to study. When you take an open note test you’re not just copying from your notes you have to think, study, and use your notes to help you. I liked that we got to use our iPads to take notes but I think we should have each country in different notes so it is easier to find the story. I like open note test because all of your information is right in front of you. It took a long time but I think I did good on it.

Today we took a wisdom tales test. We have been working on many different tales for about two months. I like taking open note tests because if you have good notes you’re probably going to get a good grade. Plus it’s really helpful to have your notes right in front of you. There was an advantage to having an iPad, it was a lot more organized. If it wasn’t on an iPad, you could have ten pieces of paper and you would have to look through all of them just to find one or two sentences. I hope the next time we have a test it is open note. 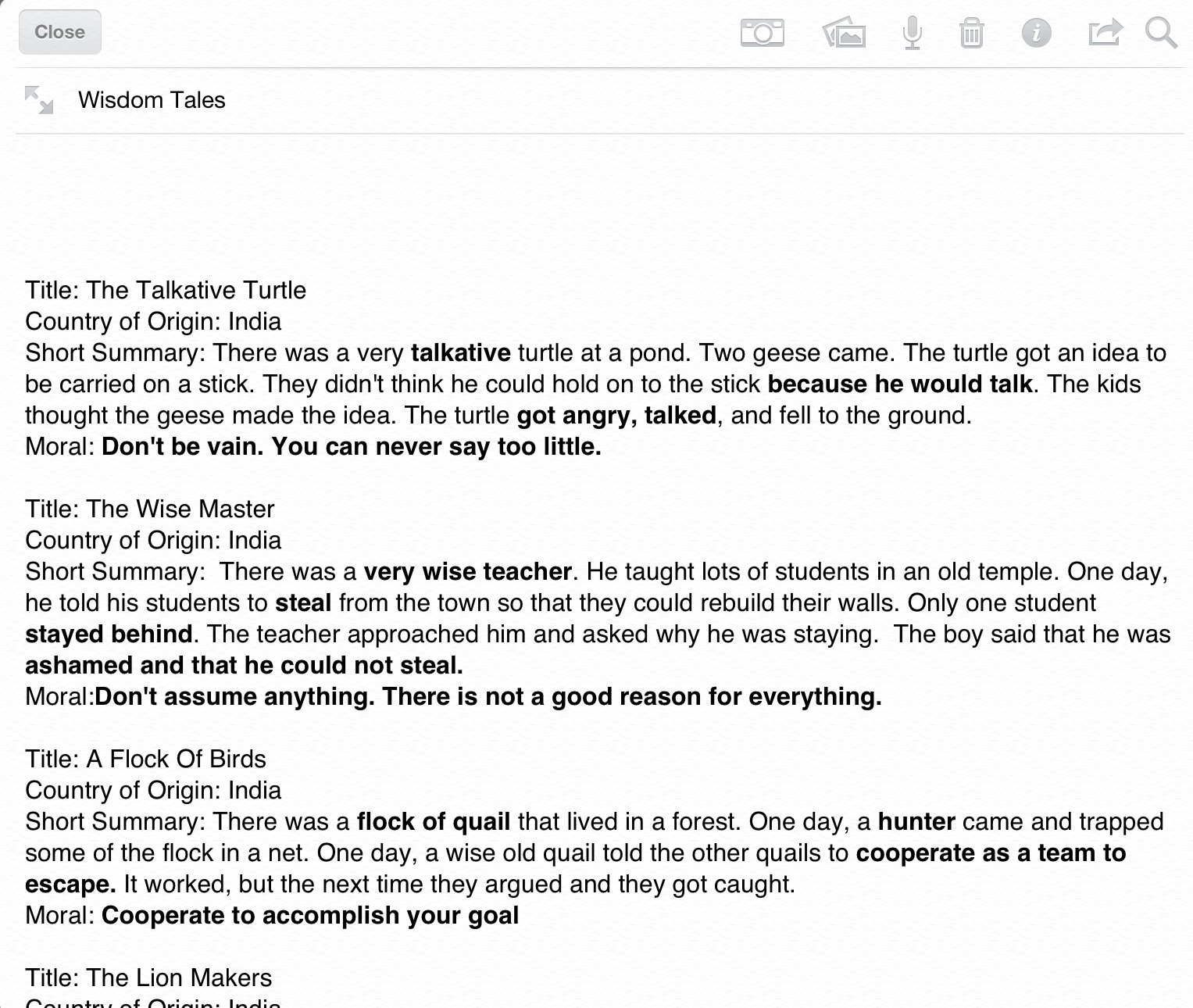 Today, we took a test with iPads for open notes. As a result, I do not know for a fact but my guess is that most people did not study as much as they would for a normal one. It was much easier and I finished rather quickly. I think that the iPads are good but sometimes they can be a distraction during a test. There are lots of bright icons and notifications that are distracting and might tempt one to click them.

Open note tests can be hard or easy. Today my class took an open note test on wisdom tales. I think that the open note test is much easier than regular tests because I often stress trying memorize everything. But don’t try to take advantage of that. Still, if you don’t study, you won’t understand what it’s talking about.

This LA test was a great experience even though I’ve taken several other open note tests. And with the iPad, it’s so much easier! You would have to write everything down by hand which tires you a lot, and you have to look through every page to find the right note if it wasn’t for the iPad.

The iPads were very helpful during the test and for studying because everything was very organized and you could go back and forth between different notes very quickly. After going though this experience I would have prepared a little bit more because there were some parts of the test that I did not expect to be on it.

On Wednesday, Mrs. Donnelly’s class had an open- note wisdom tales test. I liked it because I didn’t have to remember as much as regular tests. I was also able to work a little faster with the Emojis and highlighting job I had done. It helped me find the specific stories. I didn’t have to do much to study except for my highlighting and Emojis because I had been going over them every time we had to do another in our notes.

The Mind Meister map helped also. I would not have been able to remember all of the different types of stories. Overall, I like having open note tests rather than regular tests because they make me feel less stressed. I was also able to learn how to right a proper essay which I am guessing will come in handy later on in schooling. It definitely made me realize how much easier it is to organize notes when you have tons of different notes all together like that. I will definitely be using that strategy again and I hope it will be for another open- note test (more preferably, a quiz!).

Photo taken by me, one of the parts of the mind map of the wisdom tales with their morals.

Today we took an open note test on the wisdom tales unit. This was different than any other test that I have taken, partly because this is the first year that I have had an iPad issued to me. This was the first open note test that I have had this year, but it really stood out to me because all of my notes are on my iPad, but the test was paper and pencil. I have taken a few open note tests before, but none where my notes were on my iPad. I found it easier with the iPad, because most of my notes are in Evernote, I could quickly use the search feature to look up the wisdom tale. I was also able to use the pictures that I had of the board with all of the wisdom tales mind mapped by their morals in the last section! It made the whole test a lot easier!

I used my Evernote to prepare for the test, that was my main source, but I did use the pictures of the board mind map, and my MindMeister map of the types of stories. I spent most of my time on Evernote because most of my wisdom tale notes are in Evernote. This is because the note that I used to write down all of the titles, countries of origin, summaries, and morals is in Evernote, and that seemed to be most of our test. I used GoodReader some, to look at the stories and then look at what their morals were.

I liked this open note test a lot more than regular tests. I like this test because for me I had almost all of the answers in front of me. I kept my notes fairly organized, and knew where everything was so most of it was just finding the answer, and writing it down. I think I did a pretty good job on the test, and don’t see anything that I would do different. There was one tiny thing that I might of done differently, I noticed that a few of my titles were slightly different so I would have to look through my very big note instead of having my iPad search it for me. Over all I really liked this type of open note test!

Today in L.A. We took an open note test on wisdom tales. I like open note tests because I usually take good notes so you can just copy from your notes. I studied by going over my notes and making sure there were no misspellings, left out tales, and that I could understand my notes. In my opinion, I would rather have an open note test than a regular test. I liked this and I hope I get a good grade.