In “The Giver”, Jonas receives a bunch of memories that have been passed down from generation to generation. The first memory he received was of going down a snowy hill on a sled. If I had to give away memories I would first give away a memory of surfing. It would start with paddling to catch a good sized wave on a really pretty day in Atlantic beach. Then they would catch the wave and feel the rush of accelerating fast towards the sun baked beach. Next would come getting up by griping the rails and using strength to pull their feet under them. Then the most exhilarating part would come! Actually surfing! There is no feeling like it. The wax under your feet, the sun on your back, the water racing under you. I might even give them a trick or two! Maybe a snap of the lip. Finally, jumping of would come. I hope I don’t accidentally give them the memory of when I sprained my ankle jumping of in Florida!! Then they really might apply for release!

Twice a year our school has a day dedicated to our community. This is where we spend half the day doing school work and the other half going into the community to help make it better. This is from laying down mulch to helping out at a thrift shop. My advisory went to a public school down the road to be teachers’ assistants for half the day. A few of us went and helped with kindergarteners while others were scattered around the school. Mathew, Tanner, and I went to the fifth to help a teacher. First, very briefly, we helped proofread the children’s books they were writing. We then went back to the class to grade tests for two hours. I have to say and the others would agree, it was not the most fun thing in the world! But it did bring a new appreciation for my teachers! We then went out for recess for the last few minutes. It was not the most enjoyable experience for me but I heard from others that they had a great time helping out with the kindergarteners!

In the book Cosmic by Frank Cottrell Boyce, there is a book called Talk to Your Teen in which the main character, Liam, uses to act as a father to go to a thrill park that was new even though he is only twelve. Here is an article I would write in the book.

Some kids want allowance just because their friends have it, while others want it for money. Whatever the cause, it is a great idea. You get a bunch of tasks done for just a little bit of money. Also, this teaches good life lessons. Some kids go off to college and don’t know how to clean dishes or wash pans! I consider that a failure on the parent’s part. There is a type of allowance that works better than just giving a kid seven dollars at the end of a week. Give your child a jar to put on his or her nightstand. In the jar put 30 dollars. If the chore or whatever you assign to be done isn’t done for that day, then take a dollar out. At the end of the week, tell the child they can spend the money they didn’t lose that week!

So this morning I woke up and guess what!? I was a grown up! On my nightstand though was a note saying enjoy it while it lasts! You have one week! I panicked and thought “Oh what to do!? What to do!” I finally figured out a good plan that would be the best week ever!!!!

First, I went to Dick’s Sporting Goods and bought all the supplies I could in preparation! This included a LOT of paper work for purchasing a few hunting rifles and shotguns! The very next thing I did was book a last minute flight up to, in my mind, the best place on earth, but for you people you would know it as the last frontier or Alaska!!!! I left in two hours so for that time I packed everything that would be good for the Alaskan autumn. This included jackets, shorts, (I play ice hockey so low temps don’t really affect me until below 32 degrees) shirts, and finally a holster. Let me just tell you for that last one, I have had enough near death experiences with the wildlife there to last a lifetime (true story!).

Ok so I shipped out of NC with all my hunting and camping gear in one piece and wanted to stay that way once I got there! We landed in Anchorage and if you haven’t been there it looks like any other town except for the mountains, huge moose, and bear! I hightailed it out of there as fast as I could because I only had six days left due to the 10 hour flight. I rented a car and went as far north as 5 hours would take me going off road for the last hour. I finally came to a perfect area. It was a vast valley with lush greenery that would be just crawling with all sorts of wildlife! On the plane ride I had filled out all the hunting licenses and permits I needed and it was now time to get to business. I set up camp in a high area near a flowing creek. The bears wouldn’t be there yet because the salmon weren’t running yet so I was good on that front. Well time to go hunt!

So if I was a grown up I would spend my week was spent hunting in Alaska. If your a kid then think what would I do? 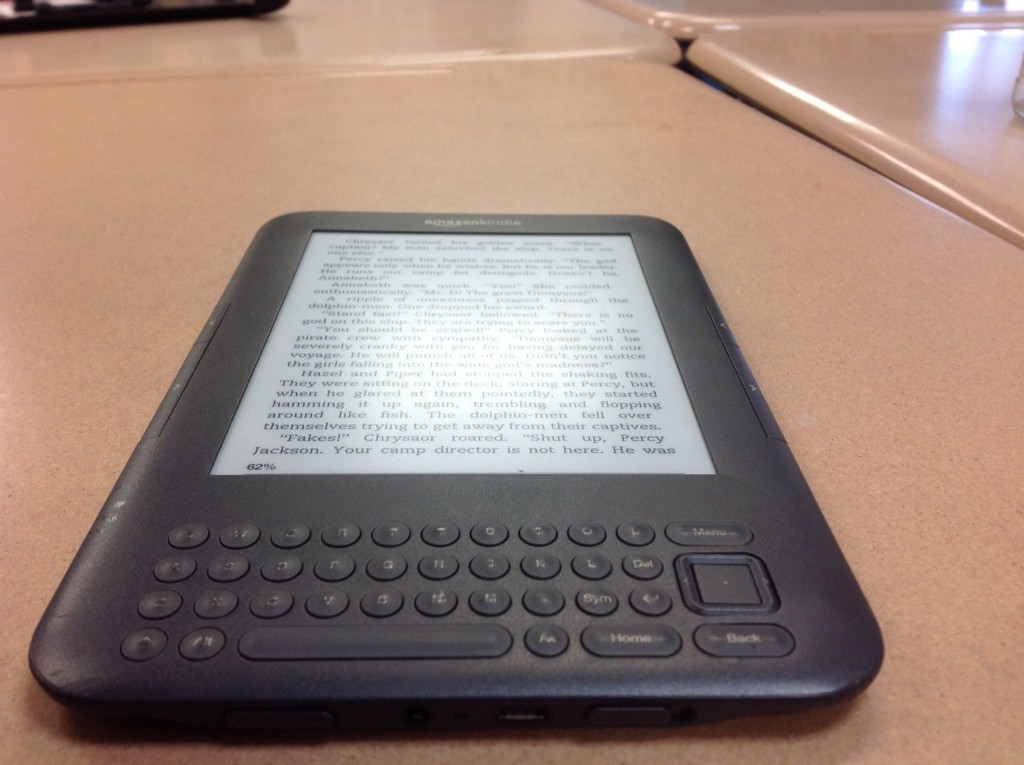 Okay so first this is a great book!!! If you need a book to read I would read the series, “The Heroes of Olympus”, which this book is in. Now to tell you about the book. Percy is back for those Percy Jackson fans, along with six other demigods in this book!

There is something new in this book, Romans! Three of the demigods are Roman: Frank, Hazel, and Jason. Then there are the Greek’s: Percy, Annabeth, Leo, Piper. These seven have gained each other’s trust earlier in the series doing quests that have saved both the Roman and Greek camps. Gaea is awakening and if she does the world will end. The ultimate test for the seven is stopping her. This includes battling many monsters, sailing on the mare nostrum (Mediterranean sea) which is banned to sail on because of all the sea monsters, and making it to Rome in one piece. Could it be any easier? Joking! Will they save the world or die along with everyone else? This is another great book by Rick Roidan!

I thought using the iPad for this open note test was extremely useful because it was all organized and neat plus I have messy handwriting so it would be a problem if I had to use notes from paper but it was typed! Gosh it took a long time learning the wisdom tales and the types of stories but it was a long test so it evens out.
Open note tests, if you have had one you know they are just as hard as closed note tests because there is so much content and a lot more thinking problems instead of just answers from the book. In all, I think it was still a little too much preparing for little things like “which story has the same moral as…” Oh well, I’m just glad to be done with that unit!

I’m thankful for sleep! I love how sleeping passes the time so fast it is like you just blinked. Also dreams are fun doing things you couldn’t do in real life such as flying or walking on the moon. What’s weird about dreams is that if you die in one you wake up instead of feeling pain or if someone is talking to you in real life you hear it in your dream. The thing I hate is getting woken up because I’m not a morning person!

It all started with being sick. I had a stomach bug that had made me miserable for a week. It was Monday and I was in chorus practicing in Taylor Hall with the rest of our class for the upcoming consert. We were in the middle of the song “Away to America” when I started noticing it. It got extremely hot in the huge room and I could feel beads of sweat crawling down my face. Then I felt sick in my stomach which wasn’t uncommon for that week. What came next was the corners of my vision started to go dark. The darkness made its way closer and closer to the center of my sight. All I could see right before it all went black was the bright light iluminating the stage. You know when you hear that frequency that is really irritating in your ears? Well that was what it was like times three along with not hearing anymore the mellifluous sound of the piano playing. That’s when I realized what was happening and immediately sat down on the stage. Thank goodness I did because right then I was on the brink of passing out. I went home a little later that day feeling miserable.

So for LA we had to do a grammar project! I did how to use numbers in a sentence because I wanted to know how to use them to improve my writing. Here is one rule: if you have two numbers in a row, spell out the first. That means in a sentence like: There were 12 7 year olds in the room, you would change it to: There were twelve 7 year olds in the room. It was fun presenting all of the rules then giving a little quiz to the class (which they passed!). 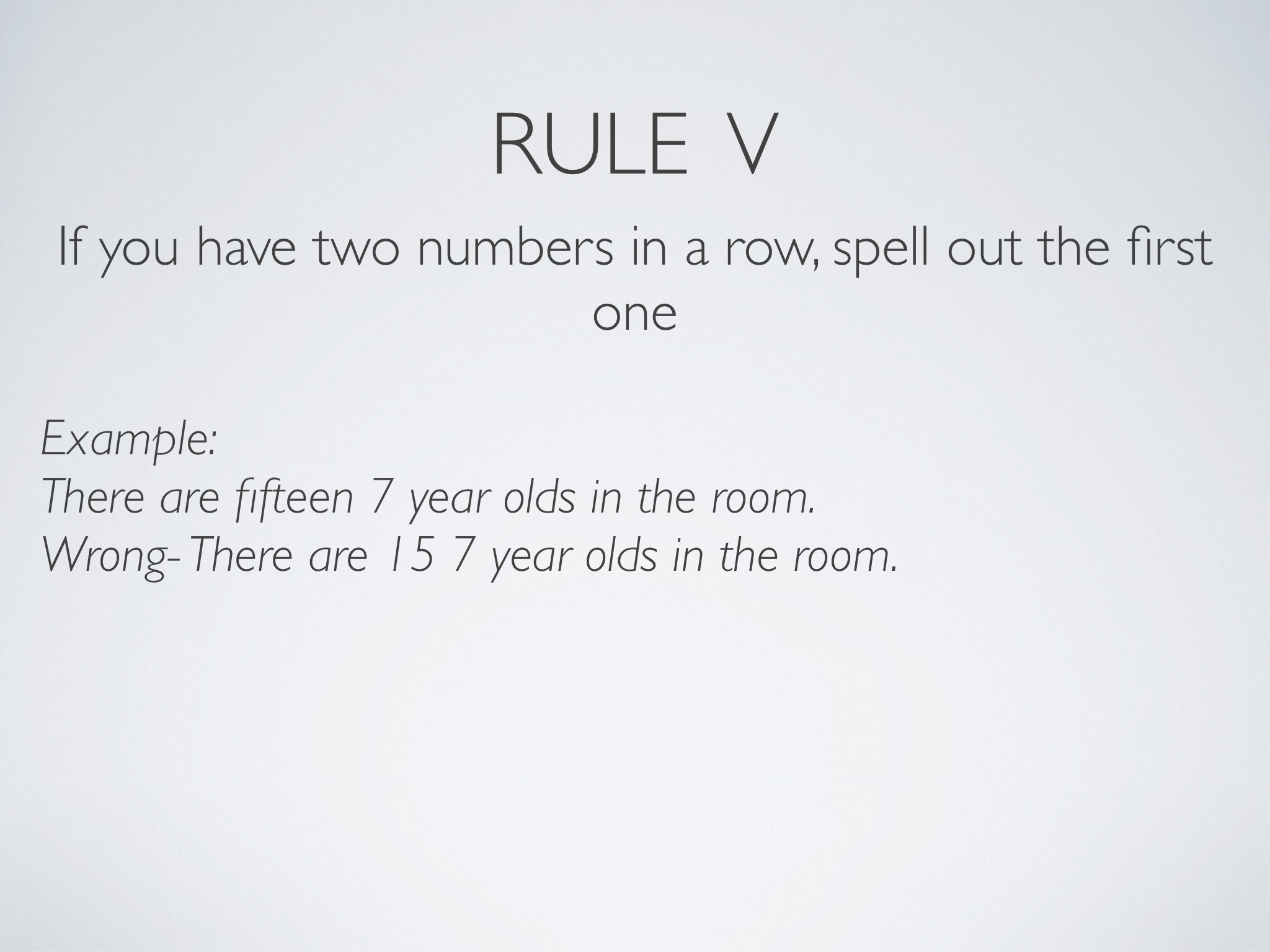 Screen shot by me!

At our school we have a community service day every so often. What we do are things such as helping at the Ronald McDonald house, making sandwiches for people in need, or what I did, go sweet potato gleaning. Gleaning is where you go into a field and pick up the leftover food that wasn’t harvested by the big machines. The food that would have otherwise gone to waste, goes to hungry people around us. It is quite amazing how much food goes to waste in those fields but also how much we saved was awesome too! Two and a half tons were gleaned. We decided to split up into groups in the beginning and Michael, Keenan, Jack, and Matthew were in my group. All together we harvested 105 bags meaning we each got 21 bags. Each bag weighed ten pounds which means our group alone harvested 1050 pounds of sweet potatoes going to needy people! In the end all of us felt good about what we did during the day.